So Trump won the election because of Russian hacking?  That's such sore loser bullshit, albeit a very predictable attempt (along with all the 'fakenews' hysteria going on in liberal circles) to, one, avoid seeing the plain truth and, two, try to delegitimize if not overturn Trump's victory.

I mean, who even remembers any of the Wikileaks emails that supposedly Russia supplied to them?  The only one I remember is John Podesta supposedly going to some 'spirit dinner' or something strange like that.  Totally forgettable.

This Russian nonsense is being peddled by the same Russian demonizers--the Washington Post, the New York Times, CNN, John McCain and the other rabid neo-cons--who have been doing the same thing for years now, seemingly trying to ramp up the Cold War all over again.

The email scandal that actually might have helped Clinton lose was of her own doing, namely her own private email server, the FBI investigation into it, and Jim Comey's public communication about it.  THAT was damaging, without a doubt, and frankly, Hillary's own damn fault.  I fully expect much more information to come out about that in the near future, that will be even more damaging to her long-term reputation. 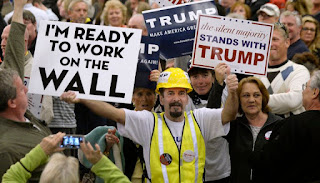 Perhaps it takes a Canadian to spell out the very plain reasons why Trump won (political scientist Clifford Owen at the University of Toronto, writing in the Globe and Mail):


Donald Trump’s victory was surprising and, to those of us who failed to predict it, downright abnormal. Yet sift through the still smouldering data and you’ll find an election that was in many respects quite normal.

There was not, overall, any popular upsurge for Mr. Trump. He received about as many votes as Mitt Romney in 2012. Mr. Trump’s votes were just better distributed. He lost Romney voters he could afford to lose (in no-hope states like California and New York, for example). He won Obama voters that Ms. Clinton couldn’t afford to lose, in the “Blue Wall” states of the industrial Midwest, in Iowa and in North Carolina. The surge of white working-class support for Mr. Trump, in urban and rural areas alike, was indeed crucial to his victory.

Was this then the decisive factor in the election? Well, not exactly. It was necessary for a Trump win, but not sufficient. He still had to do better with black and Hispanic voters than Mr. Romney.

He did. With Barack Obama off the ticket – and Ms. Clinton on it – higher percentages of both groups voted Republican last month. Black voters helped Mr. Trump even more by staying home. In crucial Michigan and Wisconsin, Ms. Clinton received an estimated 129,000 fewer of their votes than Mr. Obama, more than Mr. Trump’s combined margin of victory in the two states.

In so close an election presenting a puzzle of so many bits and pieces, we can’t point to any one as decisive. Each, like a winning basket at the buzzer, is so only in the context of all the others, any of which can therefore claim to be as decisive as it. (The first basket counts as much as the last.) It just happened to add up to a narrow Trump victory, in the Blue Wall states and overall.

Posted by Carl Lindquist at 9:35 AM