Let me start this post by stating the obvious.  The United States spies (hacks?) on every important nation around the world, whether it is friend or foe.  Proof?  How soon we forget:


The US National Security Agency tapped phone calls involving German chancellor Angela Merkel and her closest advisers for years and spied on the staff of her predecessors, according to WikiLeaks.

A report released by the group on Wednesday suggested NSA spying on Merkel and her staff had gone on far longer and more widely than previously realised. WikiLeaks said the NSA targeted 125 phone numbers of top German officials for long-term surveillance .

The release risks renewing tensions between Germany and the US a month after they sought to put a row over spying behind them, with Barack Obama declaring in Bavaria that the two nations were “inseparable allies”.

That was just a little over a year ago, and with one of our closest allies.

Now, can you even begin to imagine the spying and other shenanigans that our intelligence community engages in against adversaries like Russia and China (including in their elections)?  I'm sure it would boggle the mind of any normal person.

So, do you really think that anyone in the know in Washington is the least bit surprised that Russia may be spying on us in return?  Isn't that simply what Great Power opponents do?  That's not to excuse it, of course, but simply to explain it and to say that there's little reason to get all up in arms about it.

As Jesus said once, "He that is without sin among you, let him first cast a stone."

In any case, all the hubbub about Russia is not really about their recent spying, such as it may be.  It is simply one more example of a bigger problem in the Washington foreign policy establishment: an obsession with Russia and its current leader, Vladimir Putin, as if the Cold War had never ended and the Soviet Union had never collapsed.

Frankly, none of this would be under discussion if Trump had not won.  If Hillary Clinton had won, or if any other Republican had won, everyone would be fine and Russia would not be under discussion.  Why?  Because the ongoing demonization of Putin and Russia would have been vindicated by the election, and the bizarre effort to bring us back to a Cold War standing would be ongoing.  It wouldn't need to be discussed in public, because it would be full-speed ahead in private and sub rosa.

The only reason this is now being raised in the MSM is because Donald Trump is threatening to carry out his election promise to begin normalizing our relationship with Russia.  And the first major sign of this is his apparent intention to nominate Rex Tillerson, head of Exxon, as his Secretary of State. 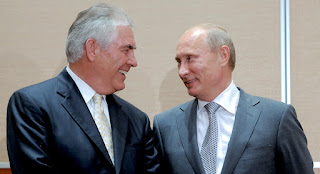 I should reiterate that one of the very first things that attracted me to Trump many months ago was his interest in normalizing our relations with Russia.  As I put it in my post explaining my vote:


The second thing that caught my attention were his statements on Russia. DJT was the only candidate of all seventeen Republicans who didn't try to demonize Russia or paint them as our primary enemy in the world. Instead, he talked respectfully about Russia and their current leader, Vladimir Putin, and emphasized the importance and possibility of working with them as two great world powers, instead of going back to old, now antiquated Cold War stereotypes.

I have in recent years felt like a real outlier in my views on Russia. While the MSM and the political establishment have basically taken to viewing Russia as if nothing has changed from the old days of the Communist-era Soviet Union, and in the process painting Putin as essentially an expansionist tyrant, I see Putin as a talented Russian leader who has brought his great country back from the brink of social, political, and economic anarchy and chaos. And he has done it while rejecting Communism, encouraging the growth of Christianity in Russia after decades of persecution, establishing the basic rule of law, and reaching out to the countries of the world to establish a variety of normal international relationships.

My research on Russia goes back to around the 2012 Sochi Olympics. It was clear that the US was going to effectively boycott those Olympics for all intents and purposes, which led me to do a lot of reading about the issues related to Russia since the fall of the Soviet Union and the evolving relationship between the US and Russia. I found myself taking the contrarian view expressed in the preceding paragraph and opposed to this ongoing effort by many in the US Establishment to isolate and demonize both Russia and Putin.

So how is it that Trump shares this contrarian position on Russia? No one seems to be able to explain it, yet I think it tracks better with the reality in Russia and around the world than other views. We don't need to return to a Cold War-style relationship with Russia, and in the process risk a nuclear confrontation. That is truly foolhardy and dangerous.

I am gratified that my instincts about Trump and his interest in a kind of 'detente' with Russia were correct, and that he is actively moving on that front.  The Tillerson nomination has not yet been formally announced, but if it is, I think he will be a fine choice.

On Morning Joe this morning (perhaps the best source of real news--instead of 'fake news'), the panel seemed to believe that Tillerson would be able to survive a tough Senate grilling from the Republican neo-cons (especially McCain and Graham) because of strong support from Republican 'realists' like James Baker, Condie Rice, and Robert Gates (all Bush people).  It helps of course that Tillerson is an oil man from Texas!

I am greatly encouraged by all this.  If all Trump manages to do is to reduce tensions with Russia and get us back on track to a normal Great Power relationship, he will done us all a great favor.