The Whiniest Democrats Ever

Watching the Democrats (and their allies in the media, academia and, especially, Hollywood) thrash around in pain and suffering after their loss in November's election is a sight to behold.  I have never in my life seen such poor, pathetic sore losers.  And to think that before the election, they and their media friends were so skeptical of Trump's willingness to accept the election results. 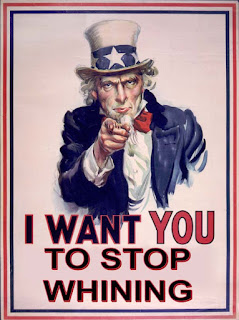 Come on, Democrats.  Stop your childish whining!  No one, outside your tight circle, wants to hear it.   It only makes us think less of you than we already do, if that's possible.

If one wants to 'blame' anyone, obviously that has to rest on the shoulders of one person alone. Hillary Rodham Clinton.  Let the buck stop right there with one of the weakest (or unluckiest, or both) candidates ever to run for President.

Here's a word of advice for Democrats.  Stop trying to blame anyone and look inside your own hearts.  As a national party, you are really in bad shape right now.  But this is a good opportunity to get your house in order.

But that won't happen if you just keep acting like spoiled brats.
Posted by Carl Lindquist at 10:29 AM