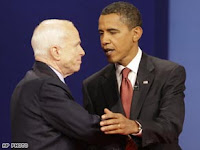 This issue of John McCain not looking at Obama during the whole debate: was it insecurity, was it contempt, was it...what was it? Whatever it was, it was bizarre.

Here was one person's take:
"I think people really are missing the point about McCain's failure to look at Obama. McCain was afraid of Obama. It was really clear--look at how much McCain blinked in the first half hour. I study monkey behavior--low ranking monkeys don't look at high ranking monkeys. In a physical, instinctive sense, Obama owned McCain tonight and I think the instant polling reflects that."

A psychotherapist friend of mine said that he thinks it reflects a split in McCain's psyche...and that's all I understood...Lee, could you run that by me again?
Postscript: I just read David Broder's piece in the Washington Post where he turns it around and says that McCain was the Alpha Male ignoring the subordinate. Interesting.
Posted by Carl Lindquist at 7:56 PM