A long time ago there appeared in the once-revered New Yorker a cartoon. The scene was a concert venue, where a string quartet was about to perform. As the audience grew quiet, the cellist coughed, laid his bow to one side, and said: “Before we begin, I would like to say a few words about the war in Viet Nam.”

Back then it was funny. Today it is a farce.

My first reaction to the 'Hamilton' incident, where Vice President-elect Pence was first booed by some in the audience and then addressed (lectured?) by the cast at the conclusion of the musical, was negative. It seems to me that the cast chose to deliberately (and unnecessarily) politicize what should have been a non-partisan cultural event, and in doing so, demonstrated the nature of the 'liberal bubble' that so many otherwise great people live in.

The following editorial by the New York Post was right on target:


Brandon Victor Dixon’s remarks Friday night came from a good place. But they also yet again revealed the peculiar failure of liberal America to practice the empathy it preaches.

The actor who plays Aaron Burr in “Hamilton” thanked Vice President-elect Mike Pence for coming to the show, then spoke up for “the diverse America who are alarmed and anxious that your new administration will not protect us . . . or defend us and uphold our inalienable rights, sir. But we truly hope this show has inspired you to uphold our American values and work on behalf of all of us.”

The words were perfectly respectful — but the implication was downright rude. And blindly condescending. All the marches and media hysteria have made it quite plain how much alarm many feel over Donald Trump’s victory.

More important: Pence had already sent a darn clear message by coming to see the show. He had just listened to the very voices Dixon (speaking for the cast) was asking him to hear. (Plus, facing scattered boos on the way into the theater, he’d also told his family, “That’s the sound of freedom.”)

Yes, the president-elect took to Twitter to vent his displeasure; we’d rather he’d let others comment.  (Stevie Van Zandt’s tweet was on point: “There has never been a more outspoken politically active artist than me. He was their guest. You protect your guests. Don’t embarrass them.”)

But Pence took it all in stride, saying on “Fox News Sunday” that he and his family “really enjoyed the show” — “an incredible production and incredibly talented people.” He “wasn’t offended,” he said, and most important: “I just want to reassure people that what President-elect Donald Trump said on election night, he absolutely meant it from the bottom his heart. He is preparing to be the president of all of the people of the United States of America.”

In Sunday’s Post, Michael Goodwin asked liberals to consider that they might be “ignorant” about the lives of Trump voters — that they wrongly “swallowed, hook, line and sinker” the “caricature of them the Democratic Party and the national liberal media created.” Liberals dominate the national media (and most local media, too) — as well as Hollywood, Broadway and Silicon Valley. Red America has no choice but to listen to Blue America all the time.

And, sorry, it’s Blue America that routinely screams “shut up” to voices it doesn’t want to hear. That’s the essence of political correctness, and not just on campus: Recall, for example, the PC condemnation of the incredibly sensitive and nuanced “red” film, “American Sniper.” When you can’t understand how your fellow Americans could make “that man” our next president, maybe it’s time you stopped assuming it hasn’t heard you, and started listening yourselves.

The only person in this whole thing who demonstrated true grace was, in my opinion, Mike Pence. He managed to cheerfully rise above it all and show magnanimity and class.  Kudos to you, sir, and congratulations to Donald Trump for having chosen you for his running mate. 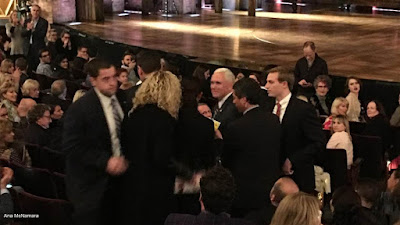 Posted by Carl Lindquist at 9:34 AM