What's to like about the man who created and ruled for nearly half a century the Communist police state and economic sinkhole 90 miles off the beaches of Florida called Cuba? 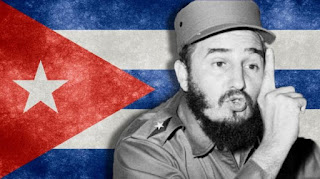 Well, apparently, quite a lot, according to some people.

The death of Fidel Castro last Friday has brought into very sharp relief the longstanding political polarization of America, in place for over a century now, between the progressive and the traditional worldviews.  Or to put it in another way, the Left and the Right.

Those on the Left of the political spectrum like and admire Fidel Castro. Those of the Right despise and loathe him.  It's really that simple.  (I locate myself on the Right these days, so you know how I feel.)

You can read a sampling of post-mortem opinion from more conservative-leaning sources of Castro and his crimes here, here, here, here, here and here.  If you want to sample the Left, well, just turn on the television (except for Fox News) or open virtually any newspaper (except perhaps the Wall Street Journal or the Miami Herald).

Castro was, as I said above, the founder and ruler of a Communist dictatorship that has lasted since the Presidency of Dwight D. Eisenhower, for God's sake.  Since I can't even remember Eisenhower (though I was a young child at the time), that is code 'for a long time now'.

Democracies can almost be defined by the fact that the 'ruled' get the chance to change their rulers fairly regularly.  (We just changed ours, to the great consternation of the Left, both domestic and foreign!)  Dictatorships on the other hand?  Not so much.  If you as a citizen want a change in leadership, then YOU have to leave, not the dictator!  Which over a million Cubans did, with many of them ending up in neighboring United States.  And they appear to be celebrating as I write.

(Oddly enough, a Caribbean cruise ship we were on last spring came across a raft with some Cuban citizens fleeing Castro.  Six months ago, they were still risking their lives to flee the Cuban revolution!  What more do you have to say, really?)

Fidel Castro came to power as a young socialist revolutionary in 1959, and his despotic regime lasted until his health was so bad he could no longer manage, at which point in 2006 he just turned power over to his younger brother, Raul, as if Cuba were his personal property, his own island fiefdom.  Which, in a way, is exactly how he viewed it.

The Right is really into history and the study of the past, mainly in order to avoid its tragic mistakes, especially the Marxist/Leninist one.  The Left, on the other hand, is really into ideology and the study of the future, to try and create a social paradise of perfect social justice and peace.  As a result, they are still being seduced by the utopian promises of the Marxist vision.  Fidel Castro was the seducer, in this case.

For the global Left, Fidel Castro was their idealized social justice warrior, storming the ramparts of injustice and greed.  It must have been quite depressing for them to see him in his pajamas, so old and feeble.  And now dead.

If I knew Castro personally or were a member of his family, I guess I would be obligated to mourn his death, at least ritually.  But since I knew him not nor am I family, my attitude right now is the same as it is toward all earthly tyrants: Sic semper tyrannis, El Comandante!

Posted by Carl Lindquist at 8:43 AM