General Michael Flynn and the Fight against Radical Islamic Jihad

One of the hallmarks of the Obama administration was its inexplicable refusal to name the phenomenon of violent Islamic jihad, despite the fact that it was responsible for most of the acts of terrorism taking place around the world.  They went so far, led by the President himself, as to rule out the use of words like 'Islamic' or 'Islamism' or 'Muslim' or 'Jihad' in trying to explain or define modern terrorism by the American military or intelligence or law enforcement.

Instead, they preferred to use such innocuous terms as 'workplace violence' or 'extremism' or just 'terrorism'.

If you find this kind of political correctness difficult to believe, especially when it comes to this life and death subject, join the club.  The critics of such a policy, some of whom were fired from their positions (like General Flynn himself in 2014), believed that it had the effect of the tying the hands of intelligence, law enforcement and counterintelligence in the fight against such terrorism.  And that criticism makes perfect sense to me.

Clearly, the days of refusing to name, define, and adequately deal with radical Islamic terrorism and Jihadism are over.  President-Elect Trump made it his practice during the election campaign of speaking the taboo words over and over again, and it was one of the reasons he won, I believe.  Despite liberal preconceptions, the American people are not as stupid or lacking in common sense as they might think.  If it looks and sounds like a duck, it's probably some kind of duck. 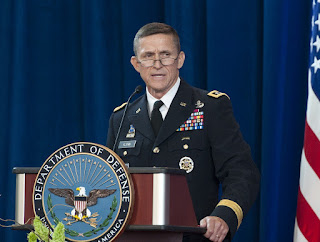 And his first big national security appointment, General Michael Flynn, is of a similar mind to his boss.  You can read all about the good general and know this fact is true here.  For an even more extensive analysis of the views of Gen. Flynn, you can read his book 'The Field of Fight' here.

I'm feeling safer already, knowing that our professional defenders and warriors are soon going to be able to better identity and search out one of the true enemies of what we in the West hold good, true, and beautiful.
Posted by Carl Lindquist at 10:18 AM