As I write, the rumor spreading like a virus across the internet and media is that Trump is meeting with Mitt Romney on Saturday, and that the subject may be a Cabinet position as Secretary of State.

My first reaction is that reaching out to Republican Never Trumpers like Romney is a good idea.  It demonstrates that Donald Trump doesn't hold political grudges and that he is willing to reach out to former political opponents, even those who went out of their way to criticize and undermine him right up to the end.  Very smart and very diplomatic, President-Elect Trump. 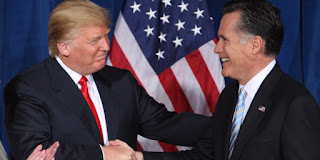 My second reaction is that Mitt Romney would make a very good Secretary of State, based on all I know about him.  He is very intelligent, well-read, well-traveled, and experienced in executive capacities like running a business and a state like Massachusetts.  He is moderate in his conservatism, excellent in character, and has a diplomatic nature about him.  I hope that Trump is serious in considering Romney, because he deserves something of significance after his loss to Obama in 2012.

One of the primary reasons that I supported Trump was because he brought a distinctive approach to foreign policy, one that I did not hear from any other candidate in either party.  In a word, he refused to demonize Russia or Vladimir Putin as everyone else was doing.  Instead, desiring to leave our half-century-long Cold War behind us because the old Soviet Union is now dead as a doornail, Trump seeks to normalize the relationship between the United States and a newly non-Communist, reChristianized, Russia.

And that's a good thing in my opinion.

The other side of that coin, of course, is that Donald Trump also recognizes that the West is being challenged by Islam in a way that has to be recognized and addressed.  But that's a topic for another post.

[Update: I came across the following article by J. Marsolo on the American Thinker website, and he makes a cogent case for why Romney shouldn't be considered.


There is much talk on all the TV news and opinion shows and the political journals that Donald Trump will appoint Mitt Romney to secretary of state, or some other important office.
This would be a mistake.

Mitt Romney did not want Trump as the nominee.  He could have shown some class and loyalty to the Republican Party by keeping his opinion to himself.  Instead, he went public with repeated savage attacks not only on Trump's policies but mostly on Trump's character.  This was completely uncalled for.  Trump won the primaries; he was the nominee.  Trump had endorsed and supported Romney in 2012.  Romney should have either endorsed and supported Trump or stayed quiet and not attacked Trump.
I could understand Romney criticizing Trump's policies during the primaries and Romney endorsing another candidate during the primaries.  But he did not do that.  He attacked Trump after Trump won the nomination.  This helped Hillary, not Trump.  It was disloyal and stupid.
Simply stated, Romney does not deserve any important office in the Trump administration, especially not the secretary of state.  The secretary represents the president in dealings with all nations.  Along with the secretary of treasury, attorney general, and secretary of defense (originally of war), it was one of the first four Cabinet positions created.  It is an important and prestigious office.
Trump will not gain anything from his loyal supporters by appointing Romney.  The MSM will cheer him for a few days, but the decision will send a message to Trump's supporters that disloyalty gets rewarded.

Posted by Carl Lindquist at 6:13 PM