The word coming down is that retired Marine General James Mattis is being seriously considered for the post of Secretary of Defense.  Whoa!  That would be interesting for sure, if these quotes are anywhere near accurate.  Talk about being politically incorrect!

“The first time you blow someone away is not an insignificant event. That said, there are some assholes in the world that just need to be shot.”

“I come in peace. I didn’t bring artillery. But I’m pleading with you, with tears in my eyes: If you fuck with me, I’ll kill you all.”

“No war is over until the enemy says it’s over. We may think it over, we may declare it over, but in fact, the enemy gets a vote.”

“Find the enemy that wants to end this experiment (in American democracy) and kill every one of them until they’re so sick of the killing that they leave us and our freedoms intact.”

Can't help but think of General Patton, as portrayed by George C. Scott in that classic movie Patton. 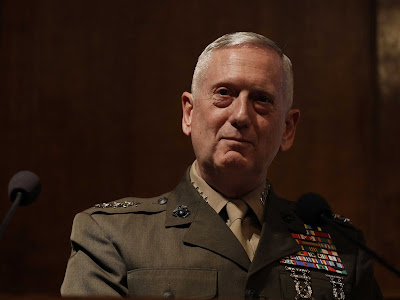 Posted by Carl Lindquist at 6:25 PM