The MSM has been going crazy about the appointment of Steve Bannon as Trump's chief White House strategist.  Bannon has a long and varied background in the military, business, Hollywood, journalism, and now, politics, and his bio can be read here.  He, along with a handful of other campaign insiders, is responsible for the election of Donald Trump as President. 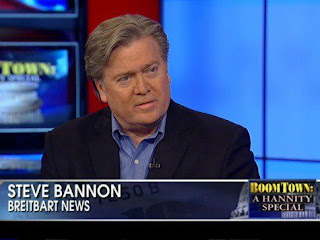 In response, the MSM is calling him an outright racist, sexist, anti-Semite, and those are just the slurs I have heard myself.  Now, I suppose that should not be surprising, since these same insults were being hurled at Donald Trump for the better part of two years now.

In any case, I don't have any reason to believe these accusations to be true.  A more interesting and responsible look at Bannon can be found in this article by Michael Wolff found, of all the places, in The Hollywood Reporter.  Bannon was a fixture in Hollywood for a number of years, which is why they have an interest in him.  He is one of their own.
Posted by Carl Lindquist at 6:08 PM