The writer and intellectual Michael Novak, who more than any other was responsible for first turning me away from the Left back in 1983, writes here on the website National Review Online concerning the election of Donald Trump. 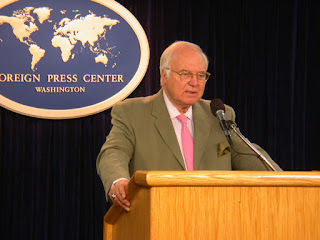 Novak sees the "Rebellion of 2016", as he calls it, as a repudiation of Progressivism and, in a more theological vein, "a work of Divine Providence".  Given that I basically said as much myself in my pre-election post, though not so elegantly ("If somehow, on the other hand, Donald Trump wins, it won't be because he had much going for him, because he didn't. It will simply have to be chocked up to divine intervention, because there is no way in hell he could have won on his own!!"), it's nice to see someone else more respectable and intelligent than I say it.


The founding generation of Americans (and many generations after that) were a Biblical people. As John Adams pointed out, the American Constitution was written for a Biblical people and would not work for any other. The founding generation held that the lucky discovery of the treachery of Benedict Arnold of September 21, 1780, came at the hands of a Providence favorable to the American cause.

As the greatest American theologian, Reinhold Niebuhr, often pointed out, the besetting sin of large American majorities is moralism. Americans love to talk too much about high morals and too little about the grubby interests and powers that make up the stuff of political decision-making. It is moralism to regard as the single criterion of sound political action the moral behavior of the agent. To concentrate on moral behavior so centrally as to lose sight of the powers and interests at play gravely weakens sound political judgment.

It was one of the great satisfactions of the election of 2016 to see so many American religious people — 81 percent of Evangelical Protestants and an unusually high 52 percent of Catholics (and an even higher 60 percent of white Catholics, or Reagan Democrats, as we used to call them) — avoid the error of moralism. They seem to have kept their eyes on the real interests, powers, and swollen ambitions of the ruling elites of the land.

The historical reputation of the Rebellion of 2016 will depend on how successfully it reintroduces classic humanism and Biblical realism into the working equipment of our media elites. In any case, it will be wonderful if our nation gains a proper respect for the dignity of those without college educations, those who work so hard, those who have been displaced during the recent global expansion.

The Rebellion will succeed if it produces more civic amity among the several races, cultures, and social bodies that make up this great nation. The whole country must be lifted up by new business start-ups, some millions of new jobs, rising incomes, and a quick start toward 4 percent growth per year. Because the current elites who have brought so much division, disappointment, and discouragement into our national life hate him so much, and their hatred is so deep that they expect very little of him, President-elect Trump is in a position to prove them wrong by a very wide margin.

God bless the new president of the United States.

(BTW, the book of Michael's that was responsible for my political 'conversion' more than 30 years ago was The Spirit of Democratic Capitalism, which can still be purchased at Amazon.)
Posted by Carl Lindquist at 10:30 AM