Canadian columnist Eric Margolis writes about the American control of the Middle East: 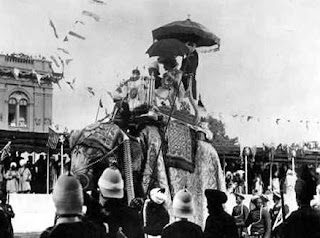 When I wrote my latest book on the way America dominates the Mideast, I chose the title, American Raj, because this modern US imperium so closely resembled the famed Indian Raj – way the British Empire ruled India.
As I predicted in this book, and in a column last April, Egypt was headed for a major explosion. America’s Mideast Raj is now on fire. Whether it survives or not remains to be seen.
One cannot escape a sense that we may be looking at a Mideast version of the 1989 uprisings across Eastern Europe that brought down its Communist regimes and then the Soviet Union. Americans should be uneasy seeing crowds of Egyptians pleading for freedom and justice watched over by US-supplied tanks.
There are indeed certainly strong similarities between the old Soviet East Bloc and the spreading intifada across the police states of America’s Mideast Raj. Corrupt, repressive governments; rapacious oligarchies; high youth unemployment and economic stagnation; widespread feelings of fear, frustration, hopelessness and fury.

Washington is watching this growing intifada in its Mideast Raj with alarm and confusion. Ignore the Obama administration’s hypocritical platitudes urging "democracy." All of the authoritarian Arab rulers now under siege by their people have been armed, financed and supported for decades by the US. The US has given Egypt $2 billion annually, $1.4 billion of which goes to the military. Almost all the tanks and armored vehicles deployed in Cairo’s streets came from the US.

Washington has previously lauded Mubarak for "moderation" and "stability." These are code words for faithfully following US policies and crushing all opposition. Moderate opposition groups across the Mideast have been jailed and tortured, leaving only outlawed underground movements. The same thing happened in Iran.

Egypt’s armed forces were configured to keep Mubarak’s military regime in power, not to defend the nation’s borders. The US keeps Egypt’s armed forces short on munitions and spare parts so it cannot fight a war against Israel for more than a few days.

The brutal, sadistic secret police and other security forces of Morocco, Algeria, Egypt, Jordan and Yemen were all trained and equipped by the US or France. The CIA taught them "interrogation techniques," just as it did to the Shah of Iran’s secret police, Savak. We have reaped the whirlwind in bitter US-Iranian relations.

Secretary of State Hillary Clinton urges "restraint" on both sides. One supposes she means those being beaten by clubs, raped, or tortured by electric drills must show proper restraint. Washington simply does not understand that this kind of hypocrisy turns even more people in the Muslim world against the United States.

Egypt, as this column has long said, has long been a ticking bomb. Half of 85 million Egyptians subsist below the UN’s $2 daily poverty level. A third of all the Arab World’s people are Egyptian. A well-connected oligarchy grows rich while the rest of the country struggles for basic food.

The Mideast uprisings are poorly understood by most North Americans. The US media frame news of the regional intifada in terms of the faux war on terror, and a false choice between dictatorial "stability" and Islamic political extremism. Much of what’s happening is seen through Israel’s eyes, and is distorted. Burning Cairo should show how misguided we have been in our understanding of the Arab world.

Platitudes aside, there is little concern in the US about bringing real democracy and modern society in the Arab world. Washington still wants obedience, not pluralism, in its Mideast Raj, and primacy for Israel in the Levant. As with the British Empire, democracy at home is fine – but it’s not right for the nations of the Arab world.

Posted by Carl Lindquist at 6:42 AM