A Rant About Republicans, in the Person of Weeper Boehner

As much as I criticize Obama, on the whole I'm glad he's President and not his opponent in the 2008 election, the unstable and quite possibly demented John McCain (and his chosen successor, Sarah Palin).  I feel mostly distain and real bitterness toward the Republican Party in most of its expressions.  They are warmongers, irresponsible economic hypocrites, and corporate prostitutes.  They talk small government, but when in office they just increase spending and the size of government.  They cut taxes but don't cut spending, and so they increase the deficit and national debt, even as they decry the deficits.  Then, when they're out of office, they criticize the Democrats for doing exactly what THEY did when in office.  Unfortunately, enough of the American people are stupid enough to believe them. 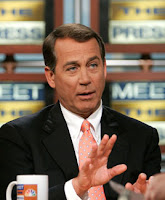 Republicans don't really care a lick (at least when it comes to actual policy) for the average American, the working and middle class millions who get up every day and make this country happen.  Or to put it another way, as Weeper Boehner keeps saying, it's the 'American Dream' they really care about, not the American people.  The Weeper cries about HIS having achieved the American Dream, not about the problems of the American people.  He has no intention and no interest in fixing the problems, for example, in our national health care system, despite his pledge to repeal Obamacare.  As far as I can see, he could care less that 50 million Americans don't have any health insurance.  He seems perfectly content to allow the dysfunctional, pre-Obama health care system to go happily on its way toward collapse.  It appears that as long as his corporate sponsors are happy, and as long as they keep their prodigious political contributions and perks coming, then he is happy.  It boggles my mind that John Boehner could be a successful Speaker of the House.  I think he will not.  In the meantime, just think, he is only two political murders away from being President.  My, that's a comforting thought!
The Republicans, with just a few exceptions (Ron and Rand Paul, the Maine Senators, and a few others), are a complete and utter farce.    God help us (and preserve and keep Barack Obama and Joe Biden!).
Posted by Carl Lindquist at 9:38 PM