The Constitution And Sacred Scripture

E. J. Dionne on the Republicans and the Constitution:


Thus the new majority will open the next Congress with a full reading of the Constitution and establish a rule requiring that every new bill contain a statement citing the constitutional authority behind it. 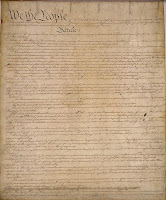 My first response was to scoff at this obvious sop to the Tea Party movement. One can imagine that the rule's primary practical result will be the creation of a small House bureaucracy responsible for churning out constitutional justifications for whatever gets introduced.
But on reflection, I offer the Republicans two cheers for their fealty to their professed ideals. We badly need a full-scale debate over what the Constitution is, means and allows - and how Americans have argued about these questions since the beginning of the republic. This provision should be the springboard for a discussion all of us should join.
From its inception, the Tea Party movement has treated the nation's great founding document not as the collection of shrewd political compromises that it is but as the equivalent of sacred scripture.

Yet as Gordon Wood, the widely admired historian of the Revolutionary era has noted, we "can recognize the extraordinary character of the Founding Fathers while also knowing that those 18th-century political leaders were not outside history. . . . They were as enmeshed in historical circumstances as we are, they had no special divine insight into politics, and their thinking was certainly not free of passion, ignorance, and foolishness."

An examination of the Constitution that views it as something other than the books of Genesis or Leviticus would be good for the country.

Email ThisBlogThis!Share to TwitterShare to FacebookShare to Pinterest
Labels: Constitution