Egypt is a very poor, very polarized, very large Arab nation. Like many other Arab nations, it also has a very large population of young adults who are highly educated, highly motivated, and now connected by social media like Twitter and Facebook, but who are also very frustrated by the lack of democracy and economic opportunity. They are basically sick and tired of the authoritarian rule of President Mubarek, who has ruled for 30 years in a single party police state. 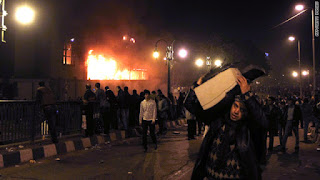 Unfortunately, he has also been our strong ally for 30 years, and we have not really encouraged democratic steps, preferring the 'stability' that his rule maintains. So, the US is being seen as very hypocritical in all this, proclaiming democracy but defending autocracy and dictatorship. That's why you're seeing a good deal of uncomfortable hemming and hawing by our government right now.
The chickens are coming home to roost now for our foreign policy. Saudi Arabia is in the same situation: our ally, very dictatorial. Fortunately, the people there are probably not in a position to protest or rebel, so things are safe for now in Saudi Arabia. But don't kid yourself, we're still supporting dictators so we can access the oil and defend Israel. That's what it boils down to, and it really bothers the 'street' in the Middle East.
Posted by Carl Lindquist at 4:18 PM