David Brooks writes a heavenly dialogue between Edmund Burke and Alexander Hamilton, his two great alter-egos, on the issue of the SOTU. Burke is given the optimistic lines, seeing Obama as the great practical realist of the day. Hamilton is the hysterical pessimist, seeing all this as a huge disaster in the making: 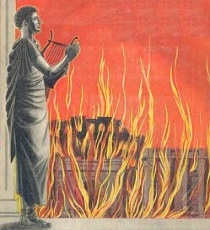 Hamilton: You’re mad, Burke! Obama has completely misread the national situation. The United States is careening toward disaster. The deficit this year is the highest in history: $1.48 trillion. In a mere eight years, the national debt will hit 90 percent of G.D.P. Interest payments alone on the debt will be $1 trillion! And he goes before the country with nostalgic happy talk and decides to spend the next two years treading water?
He pats himself on the back for a spending freeze projected to save $400 billion over 10 years. That’s an infinitesimal sliver of the $45 trillion the government will be spending over that time.
Is he aware of the national bankruptcy rushing ever closer? Doesn’t he see that the nation wants a fundamental change in Washington, not a few more tax credits for solar panels?

Obama is going to go down in history as the Nero who fiddled as Rome burned. He reformed health care without changing the ruinous incentives that were bankrupting the system. He submitted budgets that hastened the national collapse. The Republicans accuse him of being a socialist, but, the fact is, he’s Mr. Status Quo.

It looks like Brooks feels like I do: he would like to hope, with Burke, that Obama is right, but he fears, with Hamilton, that he's not.
Posted by Carl Lindquist at 8:39 AM