Peter Baker has an article today in the Times magazine about Obama's economic record of the last two years. He records the deep dysfunction that riddled the economic team in the White House: 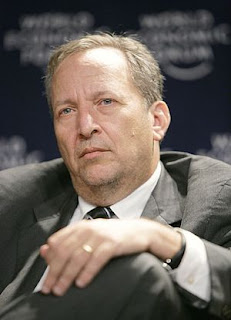 The path from crisis to anemic recovery was marked by turmoil inside the White House. The economic team fractured repeatedly over philosophy (should jobs or deficits take priority?) and personality (who got to attend which meetings?), resulting in feuds that ultimately helped break it apart. The process felt like a treadmill, as one former official put it, with proposals sometimes debated for months before decisions were reached. The word commonly used by those involved is “dysfunctional,” and in recent months, most of the initial team has left or made plans to leave, including Larry Summers, Christina Romer, Peter Orszag, Rahm Emanuel and Paul Volcker.
At the National Economic Council, Summers was charged with running the process for developing policy. But the team never embraced the no-drama-Obama ethos. Over the last two months, I interviewed nearly all of the team’s main figures, past and present, and when we talked about their relations with one another, it was like picking through the wreckage of a messy divorce.
At the center was Summers, a larger-than-life figure who by many accounts was ill suited to run a bureaucratic process. To some of his colleagues, Summers was an eye-rolling intellectual bully. “He’s much better at telling you why you’re stupid than creating a system that can produce usable policy solutions,” said one Obama adviser, who, like others, did not want to be named criticizing Summers. At meetings, colleagues with differing viewpoints felt the full force of his capacity for finding flaws in their reasoning.

Summers skirmished with colleagues over protocol. Austan Goolsbee, who opposed rescuing Chrysler, once cautioned Obama during a meeting that rescuing auto suppliers would signal that they would also save the automakers; Summers cornered him afterward and “exploded,” according to a memoir by Steven Rattner, the auto-task-force leader. “You do not relitigate in front of the president,” Summers scolded. Goolsbee retorted, “I was not litigating in front of the president.” The moment to decide whether to rescue Chrysler came during the president’s morning economic briefing. And while Goolsbee and others of his rank did not typically attend that meeting, his absence was seen as depriving the president of the strongest opposition voice. Obama noticed, and summoned Goolsbee.

Summers skirmished with Romer over a meeting at which she was not included. “I didn’t come here to waste my time,” Romer angrily told him, according to someone informed about the conversation. “I’m perfectly happy to go home.” While Summers was often blamed, the White House spokeswoman said that Emanuel’s office determined meetings and tried to keep them small. Summers and Emanuel also clashed over incentives for small business — the chief of staff kept demanding a proposal, but Summers opposed the idea of using TARP money for the initiative, arguing it would not be effective. It took months to develop a policy.

Obama knew what he was getting with Summers....


The dysfunction extended beyond Summers. Paul Volcker, the former central banker tapped to lead a new Presidential Economic Recovery Advisory Board, apparently felt ignored, at least until the president embraced his suggestion, dubbed “the Volcker rule,” to bar big banks from risking their own capital in speculative trades. Valerie Jarrett, Obama’s senior adviser in charge of relations with the business community, was derided by fellow administration officials who deemed her outreach to corporate executives empty engagement, because meetings had no tangible outcome, though, of course, her office did not set the policies that angered business in the first place. Romer was seen as insecure in Summers’s shadow, frustrating some colleagues who called her difficult, a presumption her defenders considered sexist.

“There’s no question there were strong personalities all around, and at times we were not as united as the president would have liked,” Romer told me. “I think overall we did pretty well, and we got to some good decisions and got many things done.” Whatever their differences, she noted that she shared a lot of views with Summers. “We were probably the two people in closest alignment philosophically and economically on the team,” she said.

And then there was Orszag, who turned 40 just after he was chosen as director of the Office of Management and Budget and was celebrated for his brainy dynamism. By last summer, he had left after falling out with colleagues, who considered him arrogant. When Transportation Secretary Ray LaHood mentioned to a reporter that he had settled a dispute with Orszag by going around him to Emanuel, a peeved Orszag would not take his apology calls; LaHood ultimately sent a case of wine to make amends. Orszag also exchanged testy e-mails with Emanuel over the health care effort. When colleagues suspected him of leaking information to the media, Orszag denied it. But he eventually concluded that he had allowed himself to become overexposed and recognized his relationships were poisoned.

I was against the appointment of Larry Summers from the beginning, and it seems that was about right.  His instincts for the economy have always been bad, going back to his time in the Clinton administration, when he and others like Robert Rubin pushed for all the deregulation of finance that helped 'bubblize' our economy.  Add to that his arrogance and sheer obnoxiousness, and you have a bull in a china shop, who kept Obama's economic team from doing their best.  Now most of them have bailed out.

The question is, if Obama "knew what he was getting" with Summers, as the author indicates, why did he pick him?  Possible reasons: common Harvard background, brilliant, Clinton background, prominent economist relatives (Paul Samuelson and Kenneth Arrow).  So it's kind of understandable.  But still, he was a bit of a disaster, and progressives thought so and said it at the time he was appointed.

The other important point from this article seems to be that Obama doesn't really have a clue about the economy and its fundamental problems (my conclusion, not the authors). He's floundered around, trying to figure out the problems and solutions. And his conclusion appears to me to be dead-wrong:


Three days before Christmas, President Obama gathered his economic team in the West Wing’s Roosevelt Room to review themes for his State of the Union address. The edge-of-the-cliff crisis he inherited had passed, but with more than 14 million Americans still out of work, he was looking for bold ways to bring down unemployment. The ideas presented to him, though, seemed familiar and uninspired. “You know, guys,” he said, according to someone in the room, “I’ve told you before, I want you to come to me with ideas that excite me.” Nothing he was hearing excited him.

Obama has been casting about for ideas. He held two unpublicized meetings last month with outside economists, a group of liberals one day and a group of conservatives the next, soliciting suggestions while deflecting criticism. (He was “a bit defensive,” one participant told me.) He likewise met with labor leaders and convened a four-hour meeting with chief executives from Google, General Electric, Honeywell, Boeing and other corporations. Obama was so intent on the conversation that he canceled a lunch break and asked the executives to bring their chicken, fish and pasta back from a buffet so they could keep talking.

Some of those who met with him repeated the common complaint that he has yet to articulate a coherent strategy. While the policies have been “quite good,” the “public relations and related politics have not been,” Alan Blinder, the Princeton University economist and former Federal Reserve vice chairman, told me. “One damaging result of that is the American public has little to no understanding why various things were done, why they made sense, what effect they were expected to have and did have, and instead they feel ripped off.”

Douglas Holtz-Eakin, a former Congressional Budget Office director who advised John McCain during the 2008 campaign and attended another meeting with Obama last month, said the problem goes beyond public relations. “I honestly do not know where his policy rudder resides,” he told me. “I really can’t tell. What are the principles on which he operates? He’s very smart; he knows all the policy options. I just don’t know what are the criteria by which he’s picking between them.”

Obama would say his main criterion is finding what works. His approach to economic policy has been as much improvisational as ideological, a blend of Keynesian spending, business tax breaks, bank and auto bailouts, tax cuts for workers — really almost anything he thought could fix the problems. “For all the people who want to say he’s a starry-eyed radical, in fact he’s a moderate, middle-of-the-road guy,” Christina Romer, who recently left as chairwoman of the President’s Council of Economic Advisers, told me. “He worked to fix what we have, not throw it all out and start over. To the extent that he had to take emergency action, it was born of circumstances.”

The president’s search for an agenda that will excite him, and the rest of America, has taken him to the far corners of the economic conversation. He recently asked advisers to present arguments about whether the slow recovery is part of an economic cycle that will ultimately turn around or something different, a “new normal” signaling stagnation as in Japan in the 1990s. “He’s trying to gather different ideas and different perspectives both on where we are and where we’re going,” Goolsbee said.

In the end, Obama concluded that the economic moment is part of a cycle.

No, it's not part of a cycle, at least for the average person. The ordinary person in this country has been on a downhill slide for several decades now (a slide with some ups and downs in it, to be sure), and that slide appears to be accelerating. A nice convenient cycle it is not.

For the wealthy, of course, it may well be a cycle of some sort. So Obama has it 'half' right. Or better yet, about 2% percent right (or maybe up to 10%?--no matter), since that's about how many rich people are really benefiting from things right now.
Posted by Carl Lindquist at 7:56 PM