Marcos Hardy comments on a New York Review of Books article on the recent CNN/Tea Party debate, which was, to put it mildly, not your typical Presidential debate: 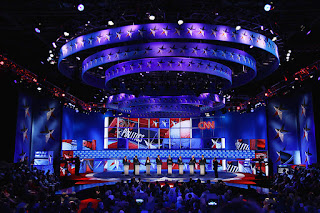 ...this nation has begat this blood-lusting, solipsistic crowd. (It is this the first time that I think of a crowd as solipsistic!) They are the problem. Today they dress in gingham and denim and belt buckles with Harley-Davidson engraves, yesterday they were cladded in tattered togas and sandals, later in brown and black shirts, breeches, jackboots and belt buckles that stated "Gott mit Uns" ("God is with us.")

They are the circus crowd.

They cheer to the prospect of a man dying because of lack of health insurance. Applauds at the mere mention of the number (<200!) of Texas government-mandated executions . This crowd would rather have their teenage daughters die of HPV-induced cervical cancer than have them vaccinated. This is the pseudo-Christian crowd that wants to do away with universal health care insurance, Social Security, Medicare, Human Rights, the EPA, education, culture and science. This crowd wants the shift of the wealth of the nation to the wealthy ones.

They equate gun ownership with freedom. They just cherish death. This is the same crowd that went deliriously happy when in a 1938 rally von Schirach, head of the Hitlerjugend, took his gun out of his holster and waving it exclaimed "Wenn ich Kultur höre entsichere ich meinen Browning!" ("When I hear the word culture I release the safety of my pistol!") Is the same crowd that in 1936 in a rally at the University of Salamanca excitedly cheered Millán Astray, the pious ultra-christian head of Franco's Foreign Legion, when he proclaimed ¡Muera la inteligencia! ¡Viva la muerte!" ("Death to intelligence! Long live death!!")

This crowd is the Republican/Tea Party mob. Perry's and Bachmann's and Romney's and Santorum's and Gingrich's and the Pizza Guy's crowd. And this crowd will elect the next President of the USA, fulfilling their death wishes, fostering the extinction of this nation.

The Republican/Tea Party is not the party of life, it is the party of death. What a sad moment for the USA! Welcome to Blood Night at the Colosseum! As Gene Wilder said in Blazing Saddles, "they are the common people, the salt of the Earth... morons." Criminal morons, one might add. And they are very dangerous.

Perhaps an exaggeration, but people have long been predicting our own home-grown fascist movement, wrapped in a flag and wearing crosses.  Maybe it's arrived.
Posted by Carl Lindquist at 5:02 PM