With the tenth anniversary of 9/11 having come and gone, I've been wondering about the so-called 'Jersey Girls', that group of 9/11 widows who did so much to push for the original 9/11 Commission, in the face of much opposition and inertia from the Bush administration. 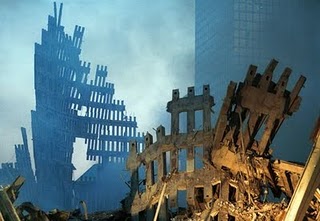 So, I ran across this podcast interview with Lorie Van Auken, one of original Jersey Girls, on Sibel Edmonds show 'Boiling Frogs'.

It seems to inevitably happen that I always find a gold nugget or two in every one of these interviews.  In this one, I learned that high-level military officers have anonymously (out of fear of prosecution and ruined careers) told Sibel Edmunds (who was herself an FBI whistleblower) that they 'know' that Flight 93 that crashed in Pennsylvania was actually shot down by the Air Force.  I've always believed that this was the case, based on the weird situation of very little debris at the crash site, according to videotaped journalistic eyewitnesses at the scene.  This of course undercuts the entire heroic myth that has developed around Flight 93.

The other thing I learned (or was reminded of) was that Anne Coulter, who criticized the 9/11 widows for their commission insistence, is such a disgusting person.

Take the time and listen to the interview, and weep for our nation.

Update:
Another nugget out of that interview was this first-hand account by one of the participants.  Secretary of Defense Donald Rumsfeld was testifying to the 9/11 Commission and was asked to respond to this question from Commission Counsel Ben-Venisti: Did you order jet fighters to protect the Pentagon from attack?  Rumsfeld paused, looked around the room and with that Rumsfeldian smile on his face, said: "Did I order jet fighers to protect the Pentagon?"  At which point, Commission Co-Chairman Lee Hamilton interrupted and said, "Times up.  Let's go on to the next question."
Posted by Carl Lindquist at 7:22 AM