Journalist and writer Ron Suskind was a major scourge of the Bush administration.  Now he is doing the same thing to the Obama administration in his soon-to-be released book, Confidence Men.  Several political writers have already read it in pre-publication edition or comment on those who have.  In any case, it's a devastating portrayal of the White House and the man who's supposed to be running it. 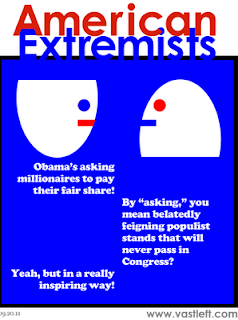 Michael Tomasky, a respected Democratic political analyst who writes for the Daily Beast and the New York Review of Books writes:


Confidence Men...confirms what we knew about Obama’s White House: that the president appointed the wrong economic team from the start, failed to crack down on the banks, and was Solomonic to a fault when formulating responses to the financial crisis (oh, and news flash: Larry Summers is hard to work with!).

That would be interesting without being shocking. But the indictment goes one mortifying step deeper: Geithner and Summers and Rahm Emanuel, and perhaps others, sometimes ignored Obama, refused to carry out his orders, and, in Summers’s case, mocked him, saying at one point to then-Budget Director Peter Orszag that “there’s no adult in charge” in the White House. And while I don’t yet know whether Suskind emphasizes this point, let’s carry the critique one step further: They did so, as far as we know, without suffering any consequences at all....

Obama was afraid to be the president. He listened to a dozen viewpoints and tried to come up with something that made everyone happy. Unfortunately, “everyone” included people on his team who were looking out for the banks more than for the public (or for their own boss), and it included people on Capitol Hill whose clear agenda was Obama’s political destruction. It’s the central—and depending on how the next election turns out, possibly decisive—paradox of this president: In trying way too hard to look presidential in the sense of “statesmanlike,” he has repeatedly ended up looking unpresidential in the sense of not being a leader.

Civil libertarian lawyer Glenn Greenwald of Salon.com makes a similar point to Tomasky's, then goes on to say that President Obama talks like a progressive but walks like a Wall Street conservative:


Perhaps most notable about the Suskind chapter on which Kakutani focuses is the process by which Obama featured progressive economists during the campaign, only to immediately subordinate them to Wall-Street-subservient officials once in power. Feigning progressive leanings for political gain is Obama's modus operandi, as Matt Taibbi recently put it in explaining why he no longer listens to Obama's speeches....

That's why -- after 2 1/2 years -- we suddenly see an outburst of "fighting for jobs" and, now, a call to raise taxes on the rich. He does that precisely because everyone -- especially the rich -- knows it will not and cannot happen. We're now formally in (re-)election season, so it's time again to haul out the progressive music. Some Democrats are honest and cynical enough to acknowledge that Obama is doing all these things purely for political gain and -- because his re-election is their top priority -- to celebrate it even while acknowledging it will never become reality (see here and here as examples). From that perspective, I suppose having him give speeches where he advocates for jobs and taxes on the rich is preferable to his endorsing austerity and Reaganomics as he had been doing for months But whatever else is true, none of this presages an actual change in how the government functions or, especially, on whose behalf it labors. That's precisely why he feels free to advocate such things without alienating his funding base. It's still the government of Tim Geithner and his bosses/owners; election season (combined with rising elite fear of social unrest) just requires a bit more pretense to obscure that fact.

That's a very harsh criticism, no doubt, from one who has mostly been critical of Obama from a civil liberties, not economics, perspective.

Is all this true?  Is Obama basically more a pleaser than a leader?  Even worse, is the nice-sounding recent rhetoric on the campaign trail little more than political pretense?  Can we possibly be that cynical about the President of the United States?

I looked up Ron Suskind on Wikipedia to see his credentials.  Here's what I found:  "Suskind was born in Kingston, New York, to a Jewish family.[2] He attended the University of Virginia, was a brother of the SPE fraternity, lived on The Lawn during the 1980-1981 school year, and was the university's 2005 valediction speaker. He received a master's degree from the Columbia University Graduate School of Journalism in 1983."

"In 1990, Suskind began working for the Wall Street Journal, and became its senior national affairs reporter in 1993. He remained in this position until 2000 when he left the Journal. While working for the Journal, Suskind published a series of articles chronicling the aspirations of Cedric Jennings, and his efforts to escape his blighted upbringing by going to Brown University. In 1995, Suskind received the Pulitzer Prize for Feature Writing for these articles. In addition to his four books, Suskind has contributed to numerous periodicals, magazines and journals including Esquire and The New York Times Magazine. In 2004, he appeared on CBS's 60 Minutes to discuss his book, The Price of Loyalty. In 2006 while promoting his book The One Percent Doctrine he was interviewed on the Colbert Report, and in 2008 he appeared on The Daily Show with Jon Stewart to discuss his book The Way of the World.[3] Other notable television interviews include NBC's "The Today Show", ABC's Nightline and PBS's Charlie Rose. In 2001 and 2002, he was a regular contributor to "Life 360," a series that blended journalists and performers that was a joint production of ABC and PBS. Between 2004 and 2008, he appeared frequently on Frontline, the award-winning PBS series."

Looks like Suskind's not some fly-by-night tabloid writer, and therefore much harder to dismiss.
Posted by Carl Lindquist at 1:23 PM