The Failings of George W. Bush

When I think about the Republicans and the Democrats, President Obama and the Congress, and our current economic crisis, there is one thing we all need to keep in mind, one thing that truly is indisputable and irrefutable. 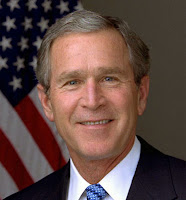 And that one thing is that when President George W. Bush took office, our budget was in surplus (or headed in that direction).  And when he left office, we were enduring the biggest economic crisis since the Great Depression.
What were the factors in those disastrous 8 years of 2001-2008?  Here are some of them.  Huge tax cuts that benefited primarily the wealthy of this country and that enormously increased the budget deficit.  Two wars and a huge expansion in our military/intelligence complex that were not paid for.  And an enormous Medicare prescription drug benefit that was not paid for.  Add to that the nearly total lack of regulation of the financial system of this country by the Federal Reserve, the SEC, the Treasury, etc, leading to a housing bubble that when it popped, nearly brought down our entire economy.  (I'm sure there were other factors as well that contributed, that are bipartisan in nature, such as the prior legislation repealing the Glass-Steagall Act, which occurred under the Clinton administration.)
So as much as I and others criticize President Obama for his failings in the area of economic and financial policy in the last nearly three years, it is only fair to remember that he was handed this foul mess by his predecessor.
Posted by Carl Lindquist at 3:00 PM