Jeremy Rifkin, a very brilliant social analyst and futurist, has a new book out on what he calls 'the third industrial revolution': 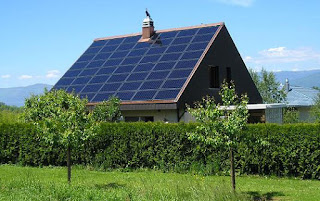 If the industrial era emphasized the values of rigid discipline and hard work, the top-down flow of authority, the importance of financial capital, the workings of the marketplace and private property relations, the collaborative era is more about creative play, peer-to-peer interactivity, social capital, participation in open commons and access to global networks.

The Third Industrial Revolution will move apace over the next several decades, probably peaking around 2050, and plateau in the second half of the 21st century. Already, in the shadow of its ascending bell curve, we can see a new economic era that will take us beyond the industrious mode that characterized the last two centuries of economic development and into a collaborative way of life. The metamorphosis from an industrial to a collaborative revolution represents one of the great turning points in economic history.

The democratization of energy has profound implications for how we orchestrate the entirety of human life in the coming century. We are entering the era of distributed capitalism. To understand how the new Third Industrial Revolution infrastructure is likely to dramatically change the distribution of economic, political and social power in the 21st century, it is helpful to step back and examine how the fossil fuel–based First and Second Industrial Revolutions reordered power relations over the course of the nineteenth and twentieth centuries.

Fossil fuels -- coal, oil and natural gas -- are elite energies for the simple reason that they are found only in select places. They require a significant military investment to secure their access and continual geopolitical management to assure their availability. They also require centralized, top-down command and control systems and massive concentrations of capital to move them from underground to the end users. The ability to concentrate capital -- the essence of modern capitalism -- is critical to the effective performance of the system as a whole. The centralized energy infrastructure, in turn, sets the conditions for the rest of the economy, encouraging similar business models across every sector.

The emerging Third Industrial Revolution, by contrast, is organized around distributed renewable energies that are found everywhere and are, for the most part, free -- sun, wind, hydro, geothermal heat, biomass and ocean waves and tides. These dispersed energies will be collected at millions of local sites and then bundled and shared with others over an energy internet to achieve optimum energy levels and maintain a high-performing, sustainable economy. The distributed and collaborative nature of the TIR energies and infrastructure favors lateral rather than hierarchical command and control mechanisms. This new lateral energy regime, in turn, establishes the organizational model for the countless economic activities that multiply from it. In the new era, providers and users aggregate nodally in vast networks and carry on commerce and trade in commercial arenas that function more like commons than markets. A more distributed and collaborative industrial revolution, in turn, invariably leads to a more distributed and collaborative sharing of the productive wealth generated by society.