Is It Stupid to Not Believe in Evolution?

Given the recent hubbub over the Republican candidates and the theory of evolution, and at the serious risk of greatly over-simplifying a very complex subject, let's discuss the issue, shall we. 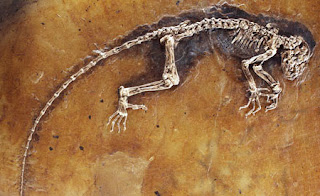 So what is this telling us?  It's telling us that unlike most other scientific theories--for example, the heliocentric theory of the solar system or the Big Bang theory of the universe, for which a huge majority of Americans would almost surely say, "yes, I can believe that"--there is something about the theory of evolution that causes a majority of Americans to withhold their affirmation.

And that 'something' is the understanding on the part of both most scientists and the American people that the theory of evolution, unlike most other scientific theories, is somehow bound up with atheism and the rejection of religion.  That, my friends, is going to be controversial in America, the most religiously inclined of all developed industrialized nations!

It is no accident that the best known atheist of the past decade, a scientist who exudes an almost missionary zeal in his public denial of God and religious faith, is Richard Dawkins, the well-known English evolutionary biologist.

Up until the 19th century, it was conventional wisdom throughout the West--even within the scientific community--that the earth and all life on it was created merely thousands of years ago and in a very short time, conforming to the creation account of the biblical book of Genesis.  Now, perhaps some Greek natural philosopher back in Athens in the 4th century BCE may have postulated a very old earth, but that was never the conventional wisdom since the Christianization of the West in the first few centuries after Christ.  So a young earth, with life created instanteously and miraculously at the spoken Word of God, was the assumption of even most educated people up until quite recently.

Everything changed with the 19th century scientific revolutions in geology and biology.  In geology, theories put forward by Scottish James Hutton and English Sir Charles Lyell in the early 19th century asserted an 'old' earth, created by a uniform, gradual process.  This in turn influenced Charles Darwin, who, in his original theory of evolution contained in On the Origin of Species in 1859, proposed that all living species of plants and animals descended from common ancestry by a process called natural selection.  Within a decade, most educated persons in in the West had accepted these new geological and biological theories of the origin of the earth and its life.

This in turn begat a serious crisis in theology and the church in the last quarter of the 19th century.  Up until that time, most Christians--and most Christian theologians--accepted the creation account in Genesis in a very literal way, as a description of what actually happened a few thousand years ago.  Now, with the new scientific theories, that was nearly impossible to sustain, so new interpretations of Genesis, based on a variety of metaphorical and non-literal methods, became commonly accepted within the Christian faith.

Refusals to accept the new scientific theories and new biblical interpretations existed, but mostly within a narrowing subset of Christianity which came to be known as Fundamentalism.  The most famous example of the conflict between the new and old ways of understanding in these matters occurred in the 1925 Scopes 'Monkey Trial' in Tennessee, where a smart but fundamentalist William Jennings Bryan went head to head with modernist Clarence Darrow.  Evolution lost that battle (Scopes and his teaching of evolution was found guilty) but won the war.

Today, the geological sciences are based on an understanding that the earth is about 4.5 billion years old.  And the biological sciences have evolution as their primary core theory.  And in some ways, the life of every American is based on this new science, if you do something as simple as go to the doctor and gets a new life-sustaining drug based on the new Biology.

Question: does evolution have to be atheistic?  That to my mind is the basic question at the heart of this entire controversy.  And I am hardly qualified to answer it, of course.  But my common sense, non-expert answer is no.  You can believe in modern science, including evolution, and still believe in God.

Many scientists do just that, of course.  One of the best known biologists of recent times--a world-famous geneticist named Francis Collins--has written a book well worth reading entitled: The Language of God: A Scientist Presents Evidence for Belief.  In it, he states this: "This book aims to dispel that notion [that a rigorous scientist could not also be a serious believer in a transcendent God], by arguing that belief in God can be an entirely rational choice, and that the principles of faith are, in fact, complementary with the principles of science."

Other thinkers have put forward a theory called 'Intelligent Design'.  This philosophical movement argues that nothing in science prevents us from believing that the natural world, including all life, was in some way designed by some intelligent divine force which science alone is unable to know or deny.  Indeed, the immense complexity in nature almost demands some kind of theory of this kind.

There are other theories which attempt to do what Professor Collins is trying to do in his book, and I shall not go into them here.  Suffice it to say that the struggle to integrate modern science and religious faith goes on.

One last thought.  The media elites do not help matters when they just lampoon or caricature the American people as 'stupid', for questioning the theory of evolution.  Indeed, science is itself partly to blame for this state of affairs, in the effort on some scientists' part to denigrate or deny the simple religious faith of average people.

It seems to me that when the American people are helped to understand that accepting the theory of evolution does not necessarily mean rejecting their faith, then perhaps it will cease being a controversial political issue.  And Presidential candidates will stop having to answer questions about evolution, which I'm sure would please most of them!
Posted by Carl Lindquist at 8:29 PM