Obama the Sole Alternative to the Radical Right

Frank Rich, one of the original progressive critics of President Obama, writes in the New York magazine about the rejection of bipartisanship on the part of today's Tea Party/conservative movement, as typified in Rick Perry, and the need for President Obama to rise up to that challenge: 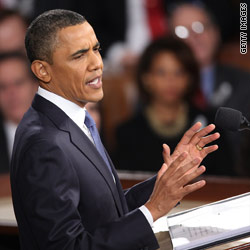 The important thing to remember about Perry is that he’s anathema to Mitt Romney, Karl Rove, and many conservative pundits no less than to liberals. His swift rise does not just reflect his enthusiasts’ detestation of Barack Obama. Perry’s constituency rejects the entire bipartisan Establishment of which Obama is merely the latest and shiniest product. For two decades, the elites in both parties and in the Beltway media-political combine have venerated a vanilla centrism, from Bush 41’s “thousand points of light” to Clinton’s triangulation to Bush 43’s “compassionate conservatism.” They’ve endorsed every useless bipartisan commission and every hapless bipartisan congressional “Gang of Six” (or Twelve, or Twenty, not to mention the new too-big-not-to-fail budget supercommittee). Perry, by contrast, is a proud and unabashed partisan. If he’s talking about gangs, chances are they’re chain gangs, not dithering conclaves of legislators. He doesn’t aspire to be the adult in the room, as Obama does, but the bull in the china shop of received opinion.
Whatever Perry’s 2012 electoral fate, his lightning ascent is final proof, if any further is needed in the day of the tea-party GOP, that a bipartisan consensus in America is as unachievable now as it was after 1964.

This is the harsh reality Obama has been way too slow to recognize. But in his post–Labor Day “Pass this jobs plan!” speech before Congress, the lip service he characteristically paid to both Republican and Democratic ideas gave way to an unmistakable preference for Democratic ideas. Soon to come were his “Buffett rule” for addressing the inequities of the Bush tax cuts and a threat to veto any budget without new tax revenues to go with spending cuts. When he tied it all up in a Rose Garden mini-tantrum pushing back against the usual cries of “class warfare,” it was enough to give one hope. No, not 2008 fired-up hope, but at least the trace memory of it. Should Obama not cave—always a big if with this president—he might have a serious shot at overcoming the huge burdens of a dark national mood and flatlined economy to win reelection.

That Obama has so long held to his faith that “there’s not a liberal America and a conservative America, there’s the United States of America,” as he intoned in his glorious 2004 keynote at the Democratic convention, is in part because that’s who he is. But it’s also because he’s all too susceptible to Washington Establishment groupthink (which is how he was seduced into the jobless Summers-Geithner “recovery” in the first place). From the moment Obama arrived at the White House, the Beltway elites have been coaxing him further down the politically suicidal path of appeasement and inertia even as his opponents geared up for war....

A radical movement controls one of the two parties. That party is so far right that when Ron Paul, now polling third among the GOP contenders, told a debate audience this month that “9/11 came about because there was too much government,” not a single one of his opponents dared object. Like it or not, Obama is the sole alternative to this crowd in 2012....

For Obama to pull it out against a slick conservative populist like Perry—or some yet-undeclared Perry alternative who could still emerge to usurp him among the tea-party troops—he cannot revert to his usual ways. Yet as recently as Labor Day, the White House was sending the message, as the Times reported, that it would “rebrand the president as a pragmatic problem solver prepared to set aside ideology.” Rebrand? That is the Obama brand. Surely someone at even this White House must recognize that it is in danger of being recalled by voters because the country’s problems have not been solved.

Obama can’t change his DNA. He is by definition a conciliatory man of the middle: as a black man raised in white America, as a mediator among warring political factions at The Harvard Law Review, as a community organizer, as a child of divorce. But sometimes blacks and whites, liberals and conservatives, and moms and dads cannot reconcile their differences. Sometimes the negotiations and compromises that are the crux of politics are nonoperative. This is one of those times. The other side has no interest in striking grand bargains or even small ones. It wants not so much to reform government, a worthy goal, as to auction off its parts and distribute the proceeds to its corporate backers....

Back in the real world, no jobs bill, let alone one of those “many bipartisan reform packages” forever floating around the Brookings Institution, has had a prayer of getting through Congress since November 2010. It’s not “stale ideological debates that have paralyzed this country,” but the intransigence of the tea party and the Republican leadership it has cowed. And so, with no legislation possible and no economic miracles in store, Obama’s presidency has shrunk to the bully pulpit. His best hope is to use that pulpit, with all the muscle, talent, and energy at his command, to ferociously define and defend the American values under siege by the revolutionaries at the capital’s gates. That doesn’t mean more eloquent speeches from Washington. It means relentless barnstorming night and day. It means at long last embracing a big-picture narrative.

Posted by Carl Lindquist at 9:40 AM