Flash in the Pan

This is the second 'Tea Party' candidate now that has rocketed into first place and then fell to earth verrrrrrry rapidly.  First, it was Michele Bachmann, and now it is Rick Perry.  Both of them seemed to be willing to say the things 'Tea Partiers' want to hear, yet neither seemed to have any staying power. 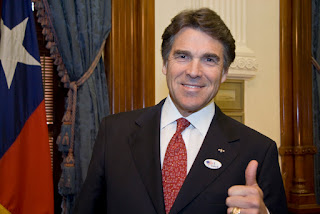 I would say the basic problem with both of them is that they came across in the debates as 'dim bulbs', with not quite the intelligence even highly ideological Tea Partiers ultimately expect from their Presidents.  Michelle Bachmann has always struck me as a sincere but a little goofy Fundamentalist.  Rick Perry's performance in the last Republican debate was dismal, to the point where he was almost incoherent.  It goes to show, I guess, that you can be a tremendously successful politician in Texas without having to have the kind of mental power that most of the rest of the country expects their political leaders to have.
The Republicans have a big problem.  They've got no Ronald Reagan, no person who combines all the elements that they're seeking.  In a way, Democrats have the same problem: they've got no FDR.
Where, oh where, is our messiah?
Posted by Carl Lindquist at 10:02 AM