Conservatives Threaten To Bolt Over Gingrich

The most devastating critiques of Newt Gingrich are coming, not from Democrats or liberals, but from conservatives and Republicans. You would expect to hear negative things about him from Newt's natural foes, and they can be chalked up to politics. But you know this is serious when the damning quotes are coming from his natural friends. 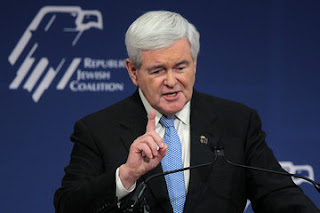 Take, for example, long-time conservative columnist George Will (the closest person we have in America to the late William F. Buckley as a conservative icon and patriarch).  Last Sunday in the Washington Post, Will had this to say about Newt.


Gingrich, however, embodies the vanity and rapacity that make modern Washington repulsive. And there is his anti-conservative confidence that he has a comprehensive explanation of, and plan to perfect, everything.

Granted, his grandiose rhetoric celebrating his “transformative” self is entertaining: Recently he compared his revival of his campaign to Sam Walton’s and Ray Kroc’s creations of Wal-Mart and McDonald’s, two of America’s largest private-sector employers. There is almost artistic vulgarity in Gingrich’s unrepented role as a hired larynx for interests profiting from such government follies as ethanol and cheap mortgages. His Olympian sense of exemption from standards and logic allowed him, fresh from pocketing $1.6 million from Freddie Mac (for services as a “historian”), to say, “If you want to put people in jail,” look at “the politicians who profited from” Washington’s environment.

His temperament — intellectual hubris distilled — makes him blown about by gusts of enthusiasm for intellectual fads, from 1990s futurism to “Lean Six Sigma” today.

Vanity, rapacity, hubris, grandiose, anti-conservative...those are fightin' words, really.  Pre-20th century Washington inhabitants might have fought a dual over them!  How could anyone apply those words to a Presidential candidate, and then turn about and vote for them? Not likely, I think.

Today, we have two more examples, from Michael Gerson of the Washington Post and David Brooks of the New York Times.  There are not two more respectable conservative columnists in all of America.


...adultery is not disqualifying for high office, but it can reveal character traits that might be. Recklessness is relevant. The exploitation of an unequal power relationship — say, with an intern — is relevant. Selfishness and compulsiveness are relevant.

Gingrich’s transgressions were more than a decade ago. But they were not merely private. As speaker of the House, he conducted an affair during the impeachment of a president for lying under oath about an affair. It helped undermine a movement Gingrich had helped to build.

And this indiscipline was not an aberration. It indicated an impulsiveness found elsewhere in his career. Gingrich has a history of making serious charges that turn out to be self-indictments — witness his recent attack on congressional advocates for Freddie Mac, despite having been one of its well-paid consultants. Gingrich’s language is often intemperate. He is seized by temporary enthusiasms. He combines absolute certainty in any given moment with continual reinvention over time.

These traits are suited to a provocateur, an author, a commentator, a consultant. They are not the normal makings of a chief executive.

Everyone deserves forgiveness for the failures of their past. But the grant of absolution does not require the suspension of critical judgment. Gingrich’s problem is not the weakness of a moment, it is the pattern of lifetime.

Policy differences between fellow conservatives is one thing, and those differences are often reconcilable. But conviction of a deficiency of character--"the pattern of a lifetime"--now that is something else.

Finally, David Brooks, admitting how much he and Gingrich agree on basic political worldview, lands a huge punch to the gut of this political giant. After stating how Gingrich loves government too much, how his greed has led him to corruption, and how much his rhetorical style is both bombastic and demogogic, Brook then goes for the jugular:

Gingrich has a revolutionary temperament — intensity, energy, disorganization and a tendency to see everything as a cataclysmic clash requiring a radical response.

I think what we are seeing here is the same thing we saw in 2008, after John McCain picked Sarah Palin to be his VP.  Namely, a shot across the bow by some important conservative figures, that if the Republicans pick an unacceptable candidate, then these conservatives will either simply abstain or defect, and take a lot of people with them.
Posted by Carl Lindquist at 1:40 PM