Vice President Joe Biden gave an interview with Newsweek that was really helpful in spelling out some of the Obama Administration's foreign policy goals, it seems to me.  (I have to say that, on the whole--given his vast Senatorial and foreign policy experience, and his unusual 'avuncular' personality--he's been a real asset to this administration.) 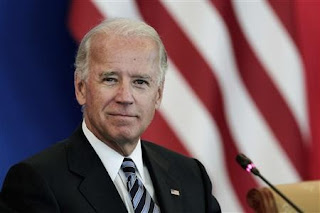 
BIDEN: I went to China at the end of August right at the time we had been downgraded. And every press guy in China, every press guy in the world was asking, was I coming to apologize. We had meetings with [Chinese President] Hu [Jintao]. I spent four days with [Vice President] Xi [Jinping]. We were in one of the big halls and the Chinese press guys asked me, why is China still buying U.S. Treasury bills? And I stood up and I said, you don’t have to buy any more. It’s OK with us. Don’t buy any more Treasury bills. I said, let me remind you, you own 1 percent of America’s financial assets—1 percent. You own 6 percent—maybe 7 to 9 percent of American Treasury securities. We don’t need you. It’s OK. Don’t buy them. Go somewhere else. (Laughter.)

NEWSWEEK: Because they have nowhere else to go?

BIDEN: Bingo. Second message was we are a Pacific power. We’re not going anywhere. Now you also live in the neighborhood, and you are an emerging power in the neighborhood. We can coexist as long as you abide by international rules.

Thirdly, we want to see—literally this is what I told them—we want to see you succeed. The reason we want you to succeed is because you’ve got a big problem that we don’t have. You’ve got to come up with 5 million jobs a year to accommodate people coming into the workforce. We have a problem with our safety net, with our entitlements, but you guys? You will have increasingly fewer workers for every retiree.

And lastly, guess what, your economy cannot continue the mercantile practices you have because you’re going to be in real trouble. Not us, you.


NEWSWEEK: One last question? After we get out of Iraq—and thank God we’re out—what continuing interest and responsibilities do we have there in case the place blows up or Iran threatens it?

BIDEN: Look, our responsibility and interest are one and the same. Our responsibility is to put Iraq in a position and enhance their prospect of them being able to be responsible and run their own affairs.

NEWSWEEK: But we’re not going to intervene again?

BIDEN: No, we are not going to have to intervene again. What would you look for in Iraq? For us to be out of there, have Iraq united, secure within its own borders, not a threat to its neighbors and no one able to fundamentally threaten them. That’s where they are now. I’m confident by our continued engagement with them we can strengthen that, and that’s overwhelmingly in our interest to do that.


NEWSWEEK: What are our vital interests in continuing to fight a major war in Afghanistan?

BIDEN: We were in Afghanistan for two reasons. One is to deal with, curtail, begin to dismantle, and eventually eliminate al Qaeda. Not only from being able to come back into Afghanistan and control Afghanistan but from the region—to decimate al Qaeda.

BIDEN: No—to fundamentally alter their capacity to do damage to American allies and vital U.S. interests, to fundamentally alter that. We have done that. It doesn’t mean they’re not capable....The second reason for us to be in Afghanistan was to make sure that a country with tens of millions of people and nuclear weapons called Pakistan did not somehow begin to disintegrate or fall apart. That is a hell of a lot tougher job.

My takeaway:  The Obama Administration believes, first, that we are in a good position with regard to China.  Second, that we can continue to oversee our interests in Iraq and the surrounding region and still take our military out of there.  And third, that our primary goal in Afghanistan was never Afghanistan itself but the stability--and nuclear security--of Pakistan (I don't believe that al-Qaeda was ever our primary goal in Afghanistan, at least since Obama came to office).
Posted by Carl Lindquist at 11:07 AM