Mitt Romney's strategy had apparently been to keep control of his campaign message by hiding out and not giving any interviews to the press.  But with the rise of Newt Gingrich, I think his handlers changed their mind. 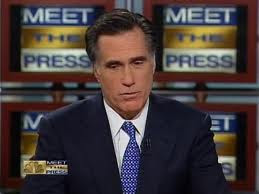 Now, Mitt is EVERYWHERE.  He was on almost all the Sunday talk shows, he gave a long interview on Charlie Rose, he appeared on Morning Joe this morning, etc.  What the hell?!  Can't you just have a balanced approach to begin with?  It's not like he drools when he talks or accidentally farts in the chair.

That change from one extreme position to another is not encouraging, Gov. Romney.  It bespeaks of a weird dynamic in your campaign and, frankly, your sense of judgment.

Anyway, when you get him talking, he sounds like a pretty normal Republican, actually fairly moderate, as these things go.  He doesn't scare you, like some of the jokers in that deck.  He does talk as if Barack Obama has been some kind of left-wing radical, which is of course pure nonsense.  But I guess that's campaign boilerplate that he has to do in order to win over some of the hate-Obama crowd in the GOP and the Tea Party.

I think his point that he has been in business and therefore knows how it works is true.  Along with his point that Obama had basically never run anything before he was elected.  Romney has run a fairly large company, he has run an Olympic Games (2002 Salt Lake City Winter Games), and he has run the State of Massachusetts.  And each of these were, on the whole, successes rather than failures.

Furthermore, I find his Mormon faith to be a strength in his life, and a reason to vote FOR him, rather than the opposite.  He has, as far as we can tell, been a great husband and family man, which is a strength.  He comes from a great family as well, with a role-model father who was also a governor and ran for President.

On foreign policy, he leans toward the hawkish side.  Does that mean we're just going to go back to the bad old days of George W. Bush and trying to remake the world in our own image, with invasion after invasion?  How would he differ from the foreign policy of George Bush, if he's listening to the guys who took us into Iraq?   For that matter, how would he differ from the foreign policy realism of Barack Obama and Hillary Clinton?  This is where I prefer Jon Huntsman and his foreign policy experience.  If Mitt would promise to make Jon Secretary of State, it would ease my mind somewhat about that.

Romney says repeatedly that he cares about the situation of the middle class, and that he accepts the need for a safety net for the poor.  Part of me wants to believe that, given that he helped make possible virtually universal health care in Massachusetts.  Yet, on the other hand, I have yet to hear him say that our economy for the thirty years or so has done for little for anyone but the wealthy in this country.  What does he think about that?  And what is his analysis of why that has happened (allowing him to become very wealthy in the process), and what can be done to change it in the future?  Have we not been moving toward a more free-market economy over the thirty years, and yet things have only gotten worse for most Americans?  What is his diagnosis and prescription for what ails us?   He's certainly not convinced me that he has a real answers to those problems.

You've finally come out of your cocoon, Mitt.  Good, now talk to us.  We're listening.
Posted by Carl Lindquist at 3:18 PM