The Enemies of Newt Gingrich (Not Who You Think)

Over the last two days, it has become clearer how many enemies Newt Gingrich has in his own Republican Party and Conservative Movement.  They are legion, it appears.  The following comes from Politico: 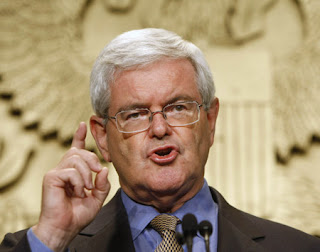 Newt Gingrich’s critics within the GOP are legion, but for the moment they’re also something else: quiet.

They all remember the last time Gingrich held power, as House speaker: the bombast, the reckless personal life, the arrogance and lack of discipline that bordered on dangerous. Some, like Dick Armey and Sen. Tom Coburn, have made a side career of keeping alive the tales of Bad Newt, with a zeal that said, never again.

But now Coburn — who declared a year ago that Gingrich is “the last person I’d vote for for president” and lacks the character to lead the nation — offers a brisk no comment when approached.

Former Rep. Bill Paxon, who sought to overthrow Gingrich, says he’d rather not revisit the past. Even Armey, the former majority leader under Gingrich turned fierce rival, has an aide say they’re “keeping quiet on Newt, for now.”

It’s a remarkable turnabout for someone whose party tried to drive him from power 14 years ago. It’s not that these detractors want to see him as the party’s nominee, let alone as president. In more unguarded moments, the prospect frightens some of them. A few figure he’s so erratic he’ll self-destruct on his own....

Gingrich’s ego made him want to be constantly at the center of all the action. He was thin-skinned and arrogant in dealing with the press and critics in both parties. He dismantled the House seniority system and accrued power in the speaker’s office, a trend that continued under his successors. And his lack of discipline often resulted in a morning strategy that was discarded by day’s end if not noon, much to the dismay of his own caucus.

Gingrich has fresh problems, too. Despite well-received performances in a long series of Republican primary debates, the familiar grandiosity that made Gingrich an easy caricature for political opponents has re-emerged with his surge in the polls. He credited himself with winning the Cold War and predicted he’ll be the Republican nominee....

Republicans were not always so hesitant to offer up unvarnished views of their former speaker. For instance, in August 2010, Coburn told the Tulsa World that Gingrich was “the last person I’d vote for for president of the United States. His life indicates he does not have a commitment to the character traits necessary to be a great president.”

Appearing on Fox News Sunday yesterday, however, Coburn expressed a reluctance to expound on his concerns, even after he was shown a clip from earlier in the year in which he criticized Gingrich.

Some Gingrich associates are bracing for a display of Old Newt at any moment — the quick-to-anger, nasty man who was so easy for the Clinton White House to caricature, particularly if he starts to face tough questions about his third wife, Callista, with whom he carried on an affair before they married.

But to those who know Gingrich’s powers of persuasion best, there’s a sense that the buyer — whether it’s a House Republican, a GOP primary voter or a swing-state independent — ought to beware.

In 2003, then-Rep. Mark Souder marveled as House conservatives — including Souder — were swayed to vote for the Medicare prescription drug law by a man who had been driven from the speakership. When Gingrich was done making the pitch to a closed-door session of House Republicans, Souder said, “He added that any of us who didn’t support it should report to his office and explain why we could not.”

“I turned to some of my friends and said: ‘This is exactly why we elected him speaker, and exactly why we removed him as speaker,’” Souder continued. “His sales pitch, more than anything else, switched my vote and the votes of others on a bill that still took most of the night to pass while the vote was held open. And Medicare is going broke faster than ever.”

Conservative patriarch George Will was almost begging Republicans and Conservatives to consider anyone other than Newt (esp. Jon Huntsman and, surprisingly, Rick Perry).  His comments about Newt are almost vicious:


Gingrich, however, embodies the vanity and rapacity that make modern Washington repulsive. And there is his anti-conservative confidence that he has a comprehensive explanation of, and plan to perfect, everything.

Granted, his grandiose rhetoric celebrating his “transformative” self is entertaining: Recently he compared his revival of his campaign to Sam Walton’s and Ray Kroc’s creations of Wal-Mart and McDonald’s, two of America’s largest private-sector employers. There is almost artistic vulgarity in Gingrich’s unrepented role as a hired larynx for interests profiting from such government follies as ethanol and cheap mortgages. His Olympian sense of exemption from standards and logic allowed him, fresh from pocketing $1.6 million from Freddie Mac (for services as a “historian”), to say, “If you want to put people in jail,” look at “the politicians who profited from” Washington’s environment.

His temperament — intellectual hubris distilled — makes him blown about by gusts of enthusiasm for intellectual fads, from 1990s futurism to “Lean Six Sigma” today. On Election Eve 1994, he said a disturbed South Carolina mother drowning her children “vividly reminds” Americans “how sick the society is getting, and how much we need to change things. . . . The only way you get change is to vote Republican.”

Vanity, rapacity, hubris, grandiose....Can we assume that George Will and Newt Gingrich don't meet for coffee on any regular basis?

I don't know how someone like Gingrich becomes the Republican candidate with such vitriolic opposition within his own natural constituency.

Damn, this Republican primary race just keeps getting more and more entertaining.  Before we're through, Obama may be the only one left standing.
Posted by Carl Lindquist at 11:16 AM