Mitt Romney Is In Big Trouble

Mitt Romney has always been the default nominee in the eyes of many in the Republican Party, and most everywhere else too.  Even when he wasn't leading in the polls, because some other person (Michele Bachmann, Rick Perry, Herman Cain, and now Newt Gingrich) was ahead of him by a few points, Romney was always seen by astute political watchers in the media as the probable, indeed almost inevitable winner down the line. 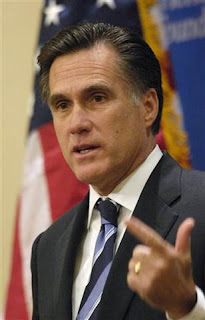 All that has changed.  Mitt Romney no longer looks like the default GOP nominee, the inevitable winner of this primary season.  The rise of Newt Gingrich has upset this apple cart, making Romney look weak, tentative, and defensive.  All of a sudden, Romney is looking more and more like a loser.

It's an odd perceptual change, if nothing else.  The polls haven't changed that much really.  Romney has been second to whoever else was in first place for months now.  But all of a sudden, it just feels like Mitt is really struggling and losing ground.  Like his defensive ground game is leaving him farther and farther behind in gaining the necessary offense needed to win this contest.

For months now, Romney has avoided the big media interview venues: Meet the Press, Face the Nation, etc.  For a long time, that has almost gone unmentioned.  Now, it is being commented on widely, and people are noticing that Mitt almost looks afraid to expose himself to tough questions.  This became the big story last week when Romney appeared on Fox's Bret Baier Show and came across as testy and defensive, rather than confident and impressive.

It's always been hard for me to understand why the Republican electorate doesn't like Romney.  He is certainly a conservative politician in both domestic and foreign policy, of that there can be little doubt.  So it's something else, perhaps his Mormon religion, perhaps this indefinable personal aura that just turns people off.  They say it's because he's flip-flopped, but I don't buy that as the reason, given there is very little purity in the field of candidates in that regard, and those who are pure (e.g. someone like Rick Santorum) haven't done very well.  Perhaps it's the 'nerd' factor, where Romney comes across as the smart but nerdy kid in the class, but isn't therefore very popular with his classmates.  (Huntsman has a little bit of the same problem, I think.)

The rise of Newt Gingrich, a smart, experienced political operative, has had something to do with this change, obviously.  But whether Newt continues to be the front-runner or not, it still feels like a sea-change for Mitt Romney.  It is no longer possible to say that he's Number One.  Only time will tell if Romney is up to the challenge of actually coming from behind to win.  That's hard to do in both basketball and politics, because once you've fashioned your basic ground game on defense, it's hard to turn around suddenly and become an offensive powerhouse.

For now, though, Mitt has fallen behind.  He is in big trouble.
Posted by Carl Lindquist at 7:23 AM