I listened to some of the Republican debate last night but didn't really watch it, so I didn't get the full impact.  From other reactions I read and heard this morning, it sounds like no one really either hurt themselves or helped themselves too much.  So it looks like we'll go into the January voting with the current lineup pretty much in place. 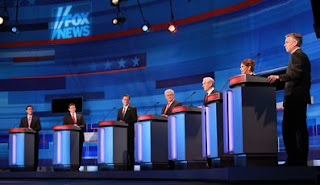 The ads being run and the on-the-ground campaigning will become bigger factors, particularly in Iowa.  After that, New Hampshire and South Carolina happen in pretty quick succession, and those are fluid races right now.  Newt Gingrich, Mitt Romney, and Ron Paul remain the three frontrunners.  One of the conservatives like Santorum or Bachmann could do well in Iowa, but that won't likely translate to the following states.  Jon Huntsman remains a dark horse in New Hampshire, but is unlikely to do much after that.

I was somewhat surprised to see maverick conservative blogger Andrew Sullivan come out with an endorsement of Ron Paul.  After all, Sullivan advocated and voted for Obama in 2008 and still defends him occasionally, although he can be brutally critical as well.  Sullivan has morphed like few others over the last 10 years, particularly going from pro-Iraq invasion to an anti-interventionist position, and also coming to see the folly in standard-brand Republican economics.  As a proud and openly gay man, he of course opposes the Republican anti-gay position.  So in all those ways, Sullivan would naturally lean toward the unwavering positions of libertarian Ron Paul, versus the other Republican frontrunners.  (Interestingly, he could also have gone with Huntsman, who shares many of Ron Paul's leanings, just in a more establishment conservative dress.  He just may yet wish he had.)

The virulent criticisms of Newt Gingrich from across the conservative spectrum remain quite astounding, given Gingrich's conservative bona fides.  But it isn't policy that's the problem there, but something deeper in Gingrich's personality and leadership skills.  Those who know him best, respect him least.  Which is probably the best argument against Gingrich's chances of winning the Republican nomination.  We'll need to wait until the results of the first few contests come in before we know which direction this things is going.

I think there is a growing possibility that you could see a third party run by Jon Huntsman.  He appeals to independent-minded voters, including disenchanted Democrats, and he might just be the candidate for this new Americans Elect organization.  Pair him up with an independent, experienced Democrat--someone like Russ Feingold--and you would have an new race this fall, I think.

So many people are talking about being open to a third-party candidate, particularly in the media, in a way I've not seen before.  It just could be the year when that kind of things actually becomes viable.  People are feeling desperate about breaking through the political deadlock and paralysis afflicting this country.
Posted by Carl Lindquist at 9:58 AM