A Bit of the Blarney, You Say?

Vice President Joe Biden, barring some kind of catastrophe, will never be President. He is too rude, too crude, and has a little too much of the Irish blarney. But he did well enough in last night's debate to staunch the bleeding from the wound inflicted by President Obama on himself last week. He was strong, articulate at times, and took it to the Republicans. 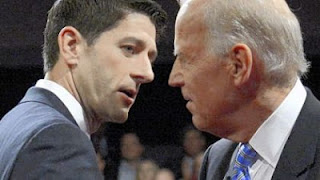 Paul Ryan, on the other hand, was nearly the opposite of Joe Biden in nearly every way. He was smooth, polite, young, and nearly unflappable. And given his youth and relative inexperience, his was a good debate performance. Far from hurting his political career by blowing the debate, he definitely helped himself, win or lose this year.

What I think most Democrats wanted to see last night was a strong defense of the Obama administration and a strong offensive attack on the Republican ticket. And they got both of these things from Joe Biden. It wasn't perfect, it wasn't always pretty--it was in fact a bit boisterous--but we didn't care. It was America incarnate.

It's quite strange, really.  In these debates, the style of the debaters is counting for far more than the substance of what they say.  Obama was passive and detached, while Romney was assertive and confidant.  Biden was aggressive and argumentative (mostly in a good way), while Ryan was calm and almost wonky.  Who cares what they actually said on the issues, as long as it wasn't an 80 proof gaffe!

Style counts for more because those who actually care about issues have already long decided who they're voting for.  The 'undecideds', on the other hand, are people who don't really know squat about the issues but are far more affected by the atmospherics of the debate (at least that's my theory this morning!).  They are the ones that these debates are meant for (and again, avoiding outright gaffes and horrible mistatements).

So while this debate was a tie, it probably helped the Democrats more than the Republicans right now.  So I guess that actually means that it was a win for the Irishman.
Posted by Carl Lindquist at 7:29 AM