Depressed and In Shock

I like political critics who just tell it like it is, who don't pull their punches even if it's their own candidates they're talking about.  Michael Tomasky and Andrew Sullivan, both Daily Beach columnists, are two of these. 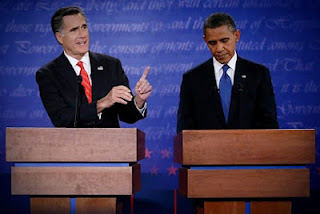 Speaking of Obama's pathetic debate performance,  Tomasky wrote this a couple of days ago:


It’s now been three nationally televised public performances in a row—the convention speech, the 60 Minutes interview, and the debate—where he was pretty terrible; withdrawn and distant and just not there. Someone needs to ask the cut-to-the-chase question: is he enthusiastic about keeping this job, or he is just maybe tired of being president?

Andrew Sullivan, one of the most vociferous Obama supporters since way back in 2007, wrote this yesterday on his blog:


That we are having this discussion at all reflects the enormity of Obama's implosion. This race is now Romney's to lose. Not just because Romney is shameless liar and opportunist. But because Obama just essentially forfeited the election. In the first match-up between the two candidates, one was a potential president; the other a dithering wonk. I'm still reeling. I'm sorry if these are not things an Obama supporter should say at this point. But the demoralization is profound.

The Pew poll is devastating, just devastating. Before the debate, Obama had a 51 - 43 lead; now, Romney has a 49 - 45 lead. That's a simply unprecedented reversal for a candidate in October. Before Obama had leads on every policy issue and personal characteristic; now Romney leads in almost all of them. Obama's performance gave Romney a 12 point swing! I repeat: a 12 point swing.

Seriously: has that kind of swing ever happened this late in a campaign? Has any candidate lost 18 points among women voters in one night ever? And we are told that when Obama left the stage that night, he was feeling good. That's terrifying. On every single issue, Obama has instantly plummeted into near-oblivion.

Look: I'm trying to rally some morale, but I've never seen a candidate this late in the game, so far ahead, just throw in the towel in the way Obama did last week - throw away almost every single advantage he had with voters and manage to enable his opponent to seem as if he cares about the middle class as much as Obama does. How do you erase that imprinted first image from public consciousness: a president incapable of making a single argument or even a halfway decent closing statement? And after Romney's convincing Etch-A-Sketch, convincing because Obama was incapable of exposing it, Romney is now the centrist candidate, even as he is running to head up the most radical party in the modern era.

Obama's supporters and admirers (include me in on that category), if they know what is happening, are simply in shock.  They can't believe what has happened, and they can't believe that Obama has done this to himself. Sullivan again:


A sitting president does not recover from being obliterated on substance, style and likability in the first debate and get much of a chance to come back. He has, at a critical moment, deeply depressed his base and his supporters and independents are flocking to Romney in droves.

I'm trying to see a silver lining. But when a president self-immolates on live TV, and his opponent shines with lies and smiles, and a record number of people watch, it's hard to see how a president and his party recover. I'm not giving up. If the lies and propaganda of the last four years work even after Obama had managed to fight back solidly against them to get a clear and solid lead in critical states, then reality-based government is over in this country again. We're back to Bush-Cheney, but more extreme.

Those of us who support President Obama, who have been making the case for him, are devastated by his incredibly shoddy and crummy debate performance. Perhaps we could excuse it in another setting, when there wasn't so much on the line. But as the polls are showing, this was simply the worst possible time to blow it. Perhaps he'll come back and pull it out in the next two debates. We shall see. But in the meantime, we are miserable and pissed.
Posted by Carl Lindquist at 7:28 AM