In the second Presidential debate at Hofstra University, Barack Obama came out of his corner ready to fight, and for the entire 90 minutes, he was on the offensive against an increasingly frustrated and rattled Mitt Romney. 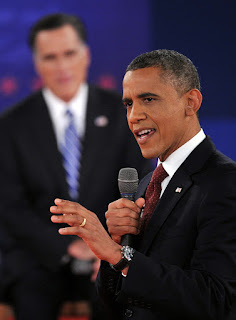 The only way I can understand Obama's performance in these two debates is to think in terms of basketball (his favorite sport).  In the first debate, Obama came out like a national championship team that didn't respect its opponent and therefore was flat in its play and overall demeanor, and as a result unexpectedly lost the game.  In the second, he came out ready to play, and therefore won the game (though not necessarily the series).

Blogger Andrew Sullivan was very happy with the results:


To my mind, Obama dominated Romney tonight in every single way: in substance, manner, style, and personal appeal. He came back like a lethal, but restrained predator. He was able to defend his own record, think swiftly on his feet, and his Benghazi answer was superb. He behaved like a president. He owned the presidency. And Romney? Well, he has no answers on the math question and was exposed. He was vulnerable on every social issue, especially immigration. And he had no real answer to the question of how he'd be different than George W Bush. I'm excitable - but sometimes politics is about emotion as well as reason. And my view is that Obama halted Romney's momentum in its tracks

If Obama had not performed to this level, the election would have been effectively over.  Now, it's game on.
Posted by Carl Lindquist at 7:08 AM