I've been writing for years now about the reported tendency of Barack Obama to wall himself off from and refuse to reach out to people in Washington.  It hasn't been talked about alot, but I've seen it enough times and in enough places that it has concerned me.  How can a President be effective in his job if he acts this way? 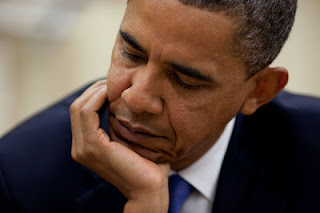 Ordinary people like you and me couldn't have known before Obama's election in 2008 about this characteristic of his.  However there were clues hidden in his past.  For example, in the Washington Post piece linked above, there is this little tidbit:


On the first page of his autobiography, "Dreams From My Father," Obama describes himself as a 21-year-old loner who was "prone to see other people as unnecessary distractions" and to avoid excessive social contact in his New York neighborhood.

"If the talk began to wander, or cross the border into familiarity, I would soon find reason to excuse myself," Obama wrote in the 1995 memoir. I had grown too comfortable in my solitude, the safest place I knew."

It looks like that character trait carried over in a major way into his Presidency.  As Elizabeth Drew wrote back in 2010, after Obama's first two years:


Barack Obama’s personality has been much mulled over in the past two years, but it seems inescapable that his high self-esteem often slides over the thin line to arrogance, which trickles down (with some exceptions) to much of his staff, some of whom are downright rude to all but a chosen few. Obama has seemed uninterested in anyone but his immediate group, and three of the four members of his immediate circle—Jarrett, Robert Gibbs, David Axelrod—had had no experience in governing. The fourth, Rahm Emanuel, expressed himself with such flippancy, arrogance, and overuse of the F-word that he offended not just members of Congress but also would-be allies of the President.

And now, columnist Joe Klein, whose judgments are impeccably honest, writes in this week's Time:


When I asked several close Obama associates about the President's reluctance to sell his policies, they admitted their frustration. They said he hates doing things that he considers transparently political. He hates the idea of inviting a bunch of pols over to the White House for a drink or a movie, because they'd see it as an obvious bribe. He'd have to fake small talk; they'd try to Holbrooke him. He hates press conferences because the gotcha questions are calibrated to generate heat rather than light. He hates the notion of launching precooked zingers in debates. He hates debates, period, with their false air of portent and stage-managed aggression. These are inconvenient prejudices if you want to be re-elected. Such ceremonies are the price of admission if you want to be a politician.

You know, WTF!  Obama, if you want to be our President, for God's sake be the President!  It's the top political office in a democracy, not the King of England!  You're not the Pope, all alone in prayer in the Vatican, for crying out loud!  What are you doing?!

As Joe Klein ended his column, I'll end this one:  "Barack Obama is going to have to come clean, descend from the mountaintop and make his best case for keeping the job."

If he doesn't, then it will go to someone who clearly WANTS to be President and is willing to do almost anything to get it.  And then there's going to be a LOT of people VERY upset with Barack Obama, for a very long time.
Posted by Carl Lindquist at 4:01 PM