How weird is this?  A major hurricane plows into New Jersey and New York a week before the election, bringing a halt to Presidential campaigning, at least for a couple of days.  Everyone's focus is turned to the drama of the unfolding disaster.  And President Obama has a major job to do, as the national disaster 'coordinator-in-chief', while Mitt Romney has almost nothing he can do, except speak at a relief fund raiser in Ohio. 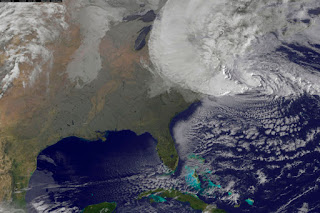 Who knows what the political consequences of this will be?  It looks like it could possibly help the President, but it's impossible to know.

What IS clear, however, is that aside from the news anchors and the various storm reporters in their raingear standing beside the rising water, virtually everyone else in sight is a governmental leader or employee.  When disaster strikes, it's the government that takes over and handles things.

It's Gov. Christie of New Jersey, Mayor Bloomberg of NYC, Gov. Cuomo of New York, and President Obama of the Federal Government who are the key actors, the go-to folks.  It's the first responders, the firefighters, the police, the public shelter operators and workers, the transportation officials, the city engineers, etc., etc., etc.

Where are the CEOs of the corporations, the Hedge Fund billionaires, the Wall Street tycoons, the Donald Trumps of the world?  Who knows, and who really cares?  My guess is that a lot of them flew away in their private jets before the storm hit to some hideaway in the Caribbean, so as to leave any suffering that has to take place to the 99%.

My point is not that the 'job creators' aren't important.  It's just that they're not important NOW.  Everything has a time and a place, including the government.  Which is why the extreme anti-government, anti-tax rhetoric of the Right--especially the libertarian Right--is so Wrong.

Why can't we get it through our heads?  Nobody likes to pay taxes.  I know I don't.  But as has been wisely said many times, taxes are simply the price we pay for civilization.  And civilization is exactly what we want, both in the good times and the bad times.  A modern 'civil society' requires efficient, knowledgeable, effective, competent, responsive government--and at every level: local, state, and national.

And you can't have it if you 'privatize' everything, which seems to be the libertarian, Rightwing utopian litany.  Ron Paul and Ayn Rand simply have nothing relevant to say to us today.

Government is public, non-profit, oriented to the 100%.  It responds not to 'customers' but to 'citizens'.  It looks out for the rich AND the poor, and everyone in between.  It is directly responsive to the public good, the ENTIRE public, EVERYONE.

During a CNN debate at the height of the GOP primary, Mitt Romney was asked, in the context of the FEMA's cash crunch, whether the agency should be shuttered so that states can individually take over responsibility for disaster response.

"Absolutely," he said. "Every time you have an occasion to take something from the federal government and send it back to the states, that's the right direction. And if you can go even further, and send it back to the private sector, that's even better. Instead of thinking, in the federal budget, what we should cut, we should ask the opposite question, what should we keep?"

"We cannot -- we cannot afford to do those things without jeopardizing the future for our kids," Romney replied.

Really, Gov.?  Just think what would be going on right now in the New Jersey/New York area if there weren't adequate governmental resources working 24 hours a day to get things repaired and going again.  Just think about those kids now, Gov.

Sometimes I think the Right, in all its rhetorical glory and grand simplicity, is just smoking something....
Posted by Carl Lindquist at 2:53 PM