If Barack Obama is not going through a period of substantive self-assessment right now, then he's a fool. 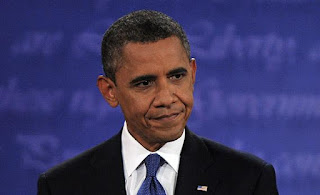 The American people have delivered to him a big time slapdown in the form of an historic drop in his national polling, after his pathetic debate performance the other night. The message? "Don't take us for granted, Mr. President. You seem to have gotten a swollen head--which is a vocational hazard in the Oval Office--and we don't like it at all. If you think this reelection is a 'gimme'--then think again!!"

Meanwhile, Mitt Romney is like a long-distance runner: maintaining his pace, hydrating himself, keeping his mind right, ignoring those around him while looking at the finish line just over the horizen. Very impressive, this political runner, and now he's taken the lead, at least in terms of momentum, if not polls.

Of course, I also called Romney a con artist yesterday, and a frenetic debater, willing to say just about anything the day before that. BUT, to some extent, all politicians do that, adjust their message to the audience they're addressing and the circumstances. Perhaps he just does it a little more than normal, or perhaps it just seems that way to us Democrats right now. In any case, you've got to admire his chutzpah! He's smart, he's cunning, he's ambitious, he's energetic. And all those things are characteristics of winners, and Romney's been a winner in his personal life, his business life, his charitable work, and at least once, his political life.

So, President Obama has his work cut out for him, if he's going to win a second term.  This will be no cakewalk for him, despite the good polling he's gotten since the conventions.

In hindsight (in a month, or a year, or a decade), we'll know more about what was going on right now behind the scenes and behind the stoic faces of the contestants, but right now, we can only guess or speculate.  My guess is that Obama got himself into a state of mind that was not particularly healthy, where he developed this sense of inevitability, of an almost narcissistic sense of entitlement; this sense that he is the political master of his age, and that it is his destiny to be a transformational President. And that he could do it HIS way, which is to plan it all out in his head, give directions to a few key people, and then let the whole thing just work out without a lot of fuss, effort, or interpersonal interaction on his part. (He doesn't like that kind of thing, apparently.)

This has been Obama's abiding weakness, I think. It began to become clear to outsiders a few years ago, or at least, I began to see it more clearly then.  Take for example this article by the veteran liberal political observer Elizabeth Drew, back in December of 2010 after the political defeat in the midterm election:


Once they got to the White House, Obama and his campaign team (virtually all of his top assistants) seemed to live in a hermetically sealed box—cut off from and not interested in what was going on outside, or what experienced people who tried to help them had to say. No one could dispute the fact that Obama was a good family man who dined with his wife and children each night and then turned to his briefing papers. To the extent that the Obamas went out in Washington, it was on their “date night,” or, so far as is known, to the Georgetown apartment of their close friend Valerie Jarrett, who also works at the White House. True, the Beltway isn’t the country, but there are people here who could have helped the Obama team navigate its shark-filled waters.

Of course Obama should have gotten out of Washington more and listened to people, not just talked at them; and, as Walter Mondale said recently, he should have gotten rid of “those idiot boards”—the TelePrompters on which the great orator has been strangely dependent and which divide him from his audiences. Last year, a friend of mine was invited to a Hanukkah party that the Obamas gave for prominent Jews (a group with whom there had been tensions), and after the Obamas descended the grand stairway, they stood in the foyer briefly, the President made a few remarks and shook a few hands, and back up the stairs they went. No mingling.

In their first two years, the Obamas have seemed a bit tone-deaf: there were too many vacations while people were hurting, especially Michelle’s extravagant trip to Spain. (I’m as interested in Michelle’s clothes as the next woman but at the same time think she and her staff are too focused on her looking smashing, which she does. Her wardrobe seems quite extensive for these troubled times.)

Barack Obama’s personality has been much mulled over in the past two years, but it seems inescapable that his high self-esteem often slides over the thin line to arrogance, which trickles down (with some exceptions) to much of his staff, some of whom are downright rude to all but a chosen few. Obama has seemed uninterested in anyone but his immediate group, and three of the four members of his immediate circle—Jarrett, Robert Gibbs, David Axelrod—had had no experience in governing. The fourth, Rahm Emanuel, expressed himself with such flippancy, arrogance, and overuse of the F-word that he offended not just members of Congress but also would-be allies of the President.

Vice President Joe Biden, who is liked on Capitol Hill, was virtually shut out of the dealings with people in Congress in the first two years—”I can handle them,” Obama told Biden—but Biden is now expected to be given a larger role as part of the White House’s new determination to “reach out.” (A few months ago highly placed members of the staff also swore they would “reach out,” but that seemed to last for just a few days.) One of the oddest aspects of Obama’s persona is that someone who seems so confident has insisted thus far in having people around him with whom he is said to be “comfortable.”

For example, Tom Donilon, his recently appointed national security adviser (a promotion from his role as deputy), is by all accounts a capable man but is no one’s idea of a serious strategic thinker. The explanation I was given for Donilon’s being given his new position was that “the President is comfortable with him.” Just as Obama is described as pleased with himself, he has been treated with hero worship by much of his staff. After all, he had taken on the formidable Clintons, and, against the expectation of almost all the pundits and the experts, he had beaten them. Why should he listen to those who had doubted him? A common complaint about the Obama White House in the first two years has been that there were no “grown-ups” around, people who knew more about governing and who would tell Obama that he was wrong. When people tried to suggest someone who should be brought in, that person was rejected as “not one of ours.” Joe Biden is said to argue with Obama on issues, such as Afghanistan, but not to get into the management of the White House.

Frankly, this was very concerning to me when I first read it, and it remains so now. How can a President expect to be successful if he cuts himself off from people in this way?  It's very troubling.

I've been defending Obama against the rightwing attack machine, which likes to accuse him of being a Muslim, a radical socialist, and in general, an unAmerican Outsider.  All of this stuff is nonsense, it seems to me, the fruit of conspiratorial, paranoic minds.

But the extremely introverted, isolated, tone-deaf, not-listening Obama?  That really concerns me.

Andrew Sullivan, a long time Obama supporter and influential blogger, has been scathing toward him since the first debate, in what many Obama supporters think of as over-the-top and hysterical.  And perhaps some of it is.  Yet in my heart I find myself agreeing with Sullivan.  And there was one comment from a reader that came in and Sullivan published that really seemed on target to me (or, at least I fear it is):


What I failed to realize back then [early in Obama's presidency] was the fatal inwardness of the man. His self-obsession makes him a good memoirist but otherwise undoes him even as a writer, since his isn't a failure to "tell a story" but rather to connect. What we saw in Denver was the Obama that was there to be seen all along: disengaged, self-interested, lecturing, not all that likable and a poor communicator. Where he's failed as president, those qualities have all come into play. In the minds of swing voters, those connections can now be made, and there's no Etch-a-Sketching away that revelation.

"...disengaged, self-interested, lecturing, not all that likable and a poor communicator."

My God, if this is true, then this election may well be Romney's to win now, and, worst of all for an Obama supporter and liberal Democrat like myself, we may have to admit that we may actually be better off that way, since this may well be a "fatal" flaw that the nation cannot tolerate too long.
Posted by Carl Lindquist at 9:33 AM