The Choice Before Us: Obama or Romney?

We need to begin summing up the arguments for and against the two Presidential candidates in this election of 2012, since early voting has already begun and the election is literally just around the corner.  And thank God for that, because this campaign has gone on far too long! 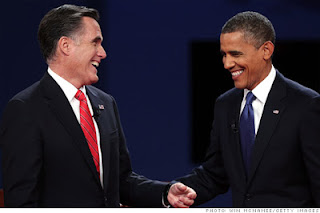 Now, if you are one of those who have been convinced somehow that Barack Obama is an illegitimate President because he was actually born in Kenya, then you don't even need to read any further.  There isn't anything I'll be saying that will be able to convince you otherwise, and you'll have to vote for the (in the 'birther' universe) only legally eligible candidates in the race, Mitt Romney (Republican) or Gary Johnson (Libertarian).

Likewise, if the mind-warping propaganda from the paranoid Far Right has convinced you that President Obama is a radical socialist or a secret Muslim, who is just bidding his time to destroy this country, then you will be voting for someone other than the President (as the lesser evil if nothing else) and you really don't need to waste your time reading any of these more mundane considerations.

I'm talking here to those of you who live in the real world and who ponder real issues, like economic and domestic policy, social issues, and international affairs, and are honestly trying to decide which of the two candidates will best serve the interests and needs of the American people and nation.

If that is where you are, then let us proceed.

I begin by positing that both Barack Obama and Mitt Romney have some real strengths and positive aspects as candidates for President.  Both have received some of the best education that America has to offer, as graduates of elite private academies, fine universities (Columbia and BYU) and law schools (Harvard).  Both men are very intelligent, although there have been troglodytes on the Republican side who have insinuated that Obama was somehow stupid (Gov. Sununu).  Both men are family men, who have beautiful wives and children, to whom they are clearly devoted and faithful.   And in this day and age, these character traits are not something we should necessarily take for granted (e.g. Sarah Palin).

Both Obama and Romney have, at some point in their lives, been seen as political moderates and centrists.  For Romney, this was particularly so in his four years as governor of Massachusetts, where he passed one of the first state universal health care plans in the country.  Since becoming a Presidential candidate, however, Romney has acquired the disease of 'Romnesia' (as diagnosed by President Obama recently!), and has forgotten all his moderate policy positions in favor of much more conservative ones.  How much of this change is real and how much is just for political purposes of getting elected, it's somewhat hard to say at this point.  If he is elected President, I guess we'll find out then.  Otherwise, it will be just a speculative matter for pundits and scholars to mull over for decades to come.

President Obama on the other hand came into office four years ago with a certain patina as the most liberal Presidential candidate in quite a while.  Some were calling him the new FDR and hoping that his administration would bring about a 'New New Deal'.  That didn't happen of course, and Obama turned out to be a moderate neo-liberal in the mold of Bill Clinton (without the folksy charm, of course!).  Now, for those of you who find this description as far fetched, then you clearly are hallucinating, having been bewitched by the Right who, in their efforts to defeat Obama and prevent him from serving a second term, have done everything they can to make him unacceptable to the average American.

So, the bottom line for me (as I wrote last June here) is that both Obama and Romney fall within the acceptable and normal limits of recent American party politics and neither represents an imminent danger to the Republic, in the way that a Herman Cain or Michele Bachmann or Sarah Palin would have (in my opinion).

So, having laid out what the candidates have in common, let me now turn to how they differ and why that matters, in my next post.
Posted by Carl Lindquist at 7:17 AM