How Rich Is Mitt Romney?

There are big questions about the wealth of Mitt Romney, since he won't release his tax returns.  But one reporter for Bloomberg does an analysis, and concludes that "the $250 million figure underestimates Romney’s true wealth." 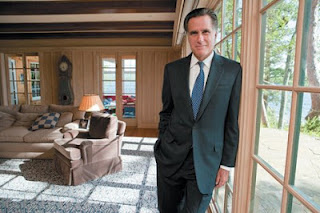 But exactly how wealthy is Romney? The figure that gets tossed around is $250 million in net worth — meaning the total value of his assets, financial and others, minus any debts. .

It’s a big number, but frankly, it seems low. Given the industry in which he made his fortune (private equity), the era when he made it (the 1980s and 1990s) and the wealth of his peers in that business (mostly billionaires), Romney should be worth a good bit more than that.... .

Romney’s net worth of $250 million is an estimate provided to the media by his campaign, and it is in line with the $254 million maximum value of his financial assets found in his June 1 presidential-candidate disclosure form. Yet this form is a masterpiece of obfuscation, in large part because it allows for absurdly wide ranges of value, with little specificity. .

The form shows that Romney has about $31 million in cash and between $250,000 and $500,000 worth of gold, and that less than a quarter of his financial assets are related to Bain. The form excludes his homes in California, Massachusetts and New Hampshire. It also excludes the (perfectly legal) tax-avoiding trust he established in 1995 for his children and grandchildren that Bloomberg estimates contains $100 million. But it includes his 1996 charitable remainder trust (listed with a value of less than $50,000 in cash), four speaking fees totaling $190,000, and both his and his wife Ann’s blind trusts and individual retirement accounts. .

Romney’s IRA, valued between $21 million and $102 million, must contain a portion of his profits — or “carried interest,” in private-equity speak — from myriad Bain deals. He put the carried interest in his IRA when it was valued at a nominal amount and then, through the financial alchemy of leveraged buyouts, watched its value soar. .

It would be illuminating to know precisely how many millions Romney still has in Bain’s private-equity funds, in various Goldman Sachs hedge funds and in hedge funds managed by his son Tagg or his former partner David Dominik — rather than the amorphous “greater than $1 million” disclosure.

Can this guy even begin to relate to my economic situation, let alone those who are actually poor?  And isn't one of the big problems over the last 30 years that the wealthy have tilted the economic playing field in their direction, such that the median family income and the jobs available to them have declined, while the wealth and income of the rich have soared into the stratosphere?
Posted by Carl Lindquist at 12:36 PM

Email ThisBlogThis!Share to TwitterShare to FacebookShare to Pinterest
Labels: mitt romney, the rich