As I was rewatching parts of the first Presidential debate yesterday as they were rebroadcast on various programs, a couple of things jumped out at me. 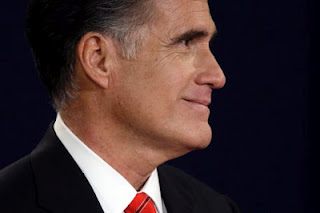 First of all, in retrospect Mitt Romney didn't seem so much eloquent or 'smart', rather he came across to me as glib and, well, almost manic.  He talked so fast, fitting so many 'talking points' and 'numbers' into as short a space as possible, that it seemed like he was on speed or something.

Second, as I mentioned in yesterday's blog post, much of what he was saying contradicted what he has been saying on the campaign trail for over the 18 months.  Suddenly, instead of the 'right-wing', please-the-base Mitt, you had the Massachusetts moderate, centrist Mitt.

And third, Romney was prepared for this debate.  Lord, was he prepared for this debate!  People had been wondering what he had been doing for weeks now, given that he was doing very little in the way of public events, perhaps one a day.  Well, now we know.  He had been holed up with Senator Rob Portman posing as Barack Obama, going over and over the lines, the 'facts', and the zingers that had been prepared for him to use in this debate.  And repeating and repeating and repeating them, until he could have done this in his sleep.....And frankly, it sounded that way to me.  A robotic presentation, delivered by a bionic man in overdrive.

So, compared to that, Obama sure sounded dull, slow, and ponderous!  But oddly enough, when I was watching earlier Presidential debates--between Ford and Carter, Carter and Reagan, or Reagan and Mondale, or even Bush, Clinton, and Perot--I didn't see anyone give a Romney-type, frenetic monologue.  Everyone spoke slowly, calmly, carefully, as if what they said mattered.  And though the challenger generally won the first debate against the incumbant (as Rachel Maddow pointed out--at great length--on her MSNBC show), commentators didn't accuse the incumbant President of being 'unPresidential' because he didn't talk like a freakin' machine gun.

If you mistake the kind of Romney ratta-tat-tat exhibited at the debate Wednesday night for actual Presidential leadership, I think you're making a big mistake.  Glibness and ability to rattle off more arguments and numbers and denials than anyone else does not equate to the wisdom, judgment, prudence, thoughtfulness, and perspective that a President actually needs to do the job.

Was Barack Obama off his game?  Yes he was, for sure!  But two primary explanations for this fact make sense.  First, he had not been subject to the debate environment in a long time.  In fact, as numerous commentators have pointed out, the Presidency subjects its occupants to a insulating bubble that keeps them from being challenged and confronted as you are in a debate setting.  So while Romney had been doing literally dozens of debates with numerous challengers for over nearly 18 months now, Obama had not done one in four years.

That's like two runners preparing for a race, and one of them trains every day for 18 months, while the other has almost no chance to train at all, because, well, he's actually BEING President.  Who's going to do better, when they're both smart cookies?  Duh....

Second, Ron Allen of Politico confirmed this morning on Morning Joe that the Obama Team's strategy had been a defensive one, of not making any mistakes and so not forfeitting the lead.  Don't attack Romney, keep your 'likeability' percentages high by being nice, be agreeable, etc.  All of which was clearly a mistake, of course.  But as many people (including me) had said before this debate, the President had a tough row to hoe here.  And that's the way it turned out, not working.

This debate was infuriating for those of us who believe that Barack Obama has been a capable President for the past four years, in the face of many challenges and adversities.  And he has given Romney an opportunity to bounce back in his campaign, no doubt.  But he has a chance as well to recover from this debate.  So when the going gets tough.....

Posted by Carl Lindquist at 7:47 AM