One thing about Mitt Romney:  if you don't like the Mitt you see today, just wait a couple of days and you'll see a new one that you might like better. 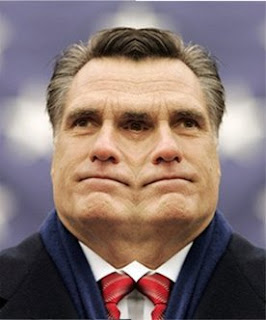 On the 47% thing, ah.....he didn't really mean that.  He actually cares about everybody.  (Pssst....just between you and me, he really did mean that, except perhaps for the poor Mormons in his congregation.  Or at least, the frugal, small-government part of Mitt means it.  Whatever.)

On the 20% tax cut he's been talking about for months....he didn't really mean that.  Now, it's just tax reform that eliminates tax deductions and crap like that.  You're not actually getting a tax cut at all.  In fact, who knows, he may raise taxes, depending on what the polls are showing....(he didn't actually say that).

As for cuts to education funding and throwing it all back to the local school districts....he didn't really mean that.  He totally loves education, and Massachusetts--where he was governor, did you know that?--has the best schools in the country, obviously all thanks to his governorship.

As for reversing 'Obamacare' on his first day in office.....he didn't really mean that.  Now, all the good things in Obamacare (like coverage for preexisting conditions)--which is just like his own universal health care plan in Massachusetts (did you know that?)--he's gonna keep, but all the bad things--like individual mandates, which he once was for, when he was governor of Massachusetts a few years ago--he's gonna dump into the Potomac River.  And that will be that.  Done.

As for opposing illegal immigration, well....he didn't really mean that.  He really loves 100% of the immigrants, especially the Hispanic ones, and especially the young ones covered by the Dream Act, which he is now for, even though he was against it.  Or rather, he was for it, before he was against it, and now he's for it again....(did I get that right?)

As for Big Bird....he didn't really mean that.  That was an unforgivable slip of the tongue, a BRAIN FART of major proportions, that he promises he won't repeat in polite company.  Mitt LOVES Big Bird (didn't you know that Big Bird converted to Mormonism recently?).
Posted by Carl Lindquist at 8:50 AM