An Extraverted America, With An Introverted President

It is a commonplace observation that America is a culture of emotion-loving extraverts.  And it seems that psychologists have backed up this observation with studies that show that, indeed, the majority of Americans have extraverted personalities that thrive, not on reason, but on outgoing and sometimes over-the-top displays of emotion. 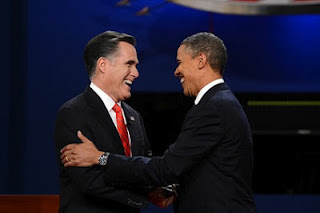 You can certainly see this in our religion.  What do Americans love more than a TV preacher like Houston's Joel Osteen, who practically gushes positivity as he comes into your living room with warmth and smiles and conversation?  God forbid you have a preacher who has spent 8 hours pouring over his sermon in his 'study', making sure it is well-reasoned and theological and biblically correct.  Hell, no!  Americans want an extemporaneous stem-winder, who can get deep inside your heart and get you all 'fired up and ready to go', even if it's only down to the altar for a little talk with Jesus!

Same thing in our politicians.  Who doesn't love Bill Clinton, with his friendly, lapel-grabbing style.  I once heard Chuck Colson relate over supper in Highlands how he encountered Bill Clinton at the funeral of Richard Nixon.  He said that no matter what your politics (and Colson and Clinton were at near-opposite ends of the political spectrum), you had to like Bill Clinton!

This is one of the reasons Mitt Romney won the first Presidential debate last evening.  He came across as earnest, sincere, emotionally energetic, and outgoing, while President Obama came across as reserved, contemplative, introverted, emotionally cool, even passive.  Romney connected with America with his style (no matter what he actually said on policy), while Obama definitely did NOT connect, no matter what he said on policy matters.

Here's the paradox.  It seems to me that Obama came into the debate wanting to avoid being aggressive toward Romney, in order to preserve his 'likeability' rating, which has been one of his political strengths.  But in the process, the President didn't connect emotionally with his audience, which was the American people.  And in America, that is a no-no.  So he actually came across as LESS likeable, not more.

There is a racial element here, that others have noted in the past.  As our first black President, Barack Obama has always known that he had to avoid making the impression as an 'angry black man', because that would strike fear and loathing in the heart of an American people who have not yet completely overcome their racial stereotypes and prejudices.  So sometimes he goes too far in the other direction, such that he becomes less effective as a tactical politician. But it's the razor's edge that he has to walk, if he is to win at all.

There is little that Obama can do to change his personality in public, without coming across as inauthentic.  But perhaps now that he'll be feeling like he can't play 'defense' anymore (since he may be trailing in the polls after last night!), he'll just have that natural competitiveness kick-in, and he'll 'naturally' take it to Romney over the next month in a way that's effective and gets him back in the fight.

Similarly, Romney was definitely at his best last evening.  But we've also seen another side of him (and seen a LOT of it) that's not so attractive, and the question is: can he avoid that not-so-pretty side showing up long enough to win the election?

Maybe he can, but consider this. What if Romney does well enough in the debates to win the election, but then reverts back to that less attractive side we've seen a lot of when he gets into the White House?  Can you imagine having to endure that for four years?  Not a pleasant thought.
Posted by Carl Lindquist at 8:23 AM