I say the 'new' Romney, because Mitt Romney's quality performance last night in his first debate with President Obama gave his campaign new energy.  He is like a boxer who had been knocked down and was on the count of nine, but then struggled to get back up, and not only got up but also managed to gave his opponent a crushing blow to his face, stunning him and knocking him back.  It is a new campaign, with about a month to go, and either side can win this thing. 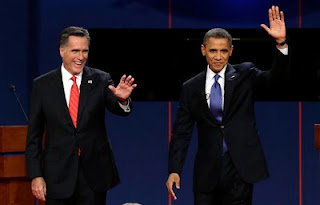 Before the debate last night, I wrote this on my Facebook wall:  "...I think that Romney may well be a better debater than Obama, and could possibly do well enough tonight to change the dynamic of this election."  And that is exactly what happened.  It's the same thing that happened time and again during the Republican primaries, which is one of the reasons Romney won the nomination.  He is good at these things.  Obama is not.

One of the most amazing things about the debate is how much the two candidates agreed.  If you were listening carefully to the first few minutes, they disagreed on very little.   Both want to create new jobs, both want to export more, both want to reduce taxes on the Middle Class, both want to help education, etc.  Truly the only significant difference seemed to be that Obama was willing to raise taxes on the wealthy, while Romney was not.  And as a result of that difference, Obama claimed that Romney's budget wouldn't be able to afford domestic programs that Obama feels are necessary, like investments in educations, etc.

I think the 'moderate' Mitt Romney was on display last night, the man who governed one of the most liberal of all states, Massachusetts.  Can you imagine what it would have been like if Herman Cain or even Newt Gingrich would have been on that stage instead of Romney?  It would have been, substantively, a very different debate.  But because Romney put forward his pragmatic, non-ideological self, there were times when the two candidates came close to saying the same thing.

But conservatives across the board seemed okay with that, because it allowed Romney to 'win' the debate, and that's what they needed: a victory.  Otherwise, you were looking at a possibly crushing defeat for the Republican Party in a month, and that is unacceptable, even to the Far Right.

This is the 'real' Romney in fact, a pragmatic, moderate, non-ideological politician, just like his father.  It's the Romney he's been hiding up until now, for fear of disapproval from the right wing of his party.  But perhaps this was the perfect time to reveal it, because the Republican Party was beginning to stare electoral defeat in the face, and they didn't like what they were seeing.  So they'll take what they can get from this party outsider and like it!

This is a Romney who can win the election, I think, and I've said that all along on this blog.  He is talented, intelligent, highly educated, self-disciplined, tall, handsome and energetic, and has a great family.  He's has had a tough fall so far, but perhaps he's put that behind him.

Whether or not he wins the election probably hinges on how Barack Obama handles this debate debacle going forword.  I think he lost because he was trying to come across as 'likeable', and was playing defense instead of offense, and, truly, is not as good at this 'debate thing' as Romney.  In the debates with Clinton four years ago, Obama did okay, but nothing more than that.  The line everyone remembers from that debate is, referring to Hillary, "you're likeable enough."  Really, is that what you want people to remember?

The other reason Obama lost the debate is that what you were seeing is who he actually is.  He is a contemplative, introverted, emotionally reserved intellectual.  Which in this case came across as passive and uninterested:  "He doesn't want to be there," was said over and over again by commentators.  No, probably he didn't want to be there.  Why would anyone who has been President (with the possible exception of Bill Clinton) want to stand on a stage with a political opponent and have to debate, after you've had the experience of being treated by everyone in the world--except perhaps your wife and kids--with extreme deference and reverence almost reserved for the semi-divine?  It's unnatural, and it must have come as a shock to the President last night, like jumping into a swimming pool of ice-cold water.

But that's the beauty and wonder of our democratic system.  It's why our Presidents are not Hitlers and Stalins, because we HAVE a democracy (unlike what the Far Right seems to think) that forces our leaders to continually go back before the people and earn their electoral approval.  So this is all good, in the long run.

My guess is that the President will recover and come out swinging.  And as a result, the next two Presidential debates are likely to be, how do you say, humdingers!!
Posted by Carl Lindquist at 7:35 AM