The Bloomberg Republican Debate had a welcome change of format from previous debates: it took place around a big table (much like the normal TV interviews of Charlie Rose, the debate's MC).  But the outcome was not very different from before. 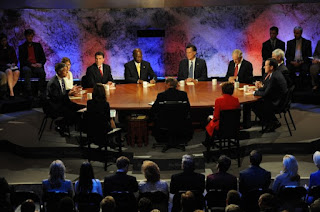 Mitt Romney continued to show his tactical brilliance and command of the debate format.  Confidant, articulate, gracious, intelligent, Romney fended off all challenges to his leadership of the field.  He even slapped down his primary challenger, Rick Perry, with seemingly little effort, making Perry seem heartless about the health care needs of children.

[Update: Alexandra Petri had this apt description of Romney in the WaPo this morning: "Mitt Romney has stopped running circles around the rest of the field and is now orbiting them several levels up. He seemed mature. He seemed awake. The fact that these characteristics set him apart tells you how bad things have gotten."]

Rick Perry was also consistent in his debate performance, namely, miserable.  Flat, dull, unable to articulate much beyond the equivalent of 'drill, baby, drill, this debate should prove to be his Waterloo.  Perry is finished, I think.

Herman Cain, who has somehow mushroomed into second place in the polls, remains a johnny one note: "9-9-9".  That seems to be the panacea to all problems, the placebo for all pain.  Bachmann actually had the best retort to that: if you turn it upside down ("6-6-6"), you'll see that "the devil's in the details".  Exactly right: Cain's well-thought out plan is apparently the brain-child of some minor contributor from Ohio who's a Wells Fargo investment advisor.  I'd call it a hare-brained scheme, that has almost no chance of implementation.

One more point about Cain: it seems that every interview he gives, he says something very dumb.  When asked about who would be his model for the Federal Reserve, he chose Alan Greenspan.  As if the disastrous credit bubbles of the last two decades, largely attributable to the Feds low-interest/non-regulatory polcies, had not occurred.  Add to this his comments on the big banks, the Occupy movement, and most foreign policy issues, and it all adds up to an extremely simple-minded man.  But he delivers good pizza, of course, and talks a good line, undoubtedly.

Jon Huntsman did better this debate, as did Michele Bachmann, but it's unlikely there will be any change in their fortunes as a result.  Gingrich, Santorum, and Paul were nonfactors.

I'd say that things were settling out and being clarified.  Despite his serious weakness in the polls among the Republican base, due to his odd personality, his Yankee moderation, and his Mormonism, Romney looks at this point to be the frontrunner, with no serious challenger in sight.  If he can make it through to the nomination, and if he were to pick a satisfactory Vice-Presidential nominee suitable to the Republican Right, he will be a very serious contender for the Presidency against Barack Obama.

Not that I find that an attractive proposition.  Romney's currently stated policy preferences are as incoherent as George W. Bush's and would probably lead to the same result: more foreign wars, continued economic failure, and social misery.

For my money, Jon Huntsman remains the only Republican candidate with a coherent view of both foreign and economic policy.  But he's getting no traction at all in the Republican electorate, and he remains, as one wag put it, the Democrat's favorite Republican.

Anyway, I hope I get some credit from you all for even bothering to watch this stupid debate.  I can't wait for the first caucus/election to arrive, so that this Republican field can be winnowed out.
Posted by Carl Lindquist at 6:56 AM