I ran across this article on the Paris Syndrome, and I want to say that I experienced something similar in my visit to Paris this summer, albeit not quite so dramatic as described below.  Granted, it certainly would have helped to speak French, which I don't and that's my own fault, since I once-upon-a-time took it in high school. 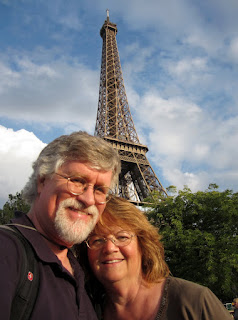 I'm glad we went to the 'City of Light'--there is much that is beautiful and grand there--but I think once is enough.  (I'm pretty sure I couldn't afford it more than once!)  In any case, I was  quite happy when we finally boarded the train for Munich.


As tourist season here in Paris winds to a close and the air once again becomes crisp, fresh, and new, we must unfortunately acknowledge that it does not end without a few casualties. Yes, this summer, like the ones that have come before it, has claimed at least 20 victims of a very particular affliction: Paris Syndrome. And though it may sound like a disease unique to freshman girls with Le Chat Noir posters everywhere, it is a serious disorder that causes tourists, especially Japanese tourists, many problems on their trip through the City of Light. And what is Paris Syndrome, exactly? Simply put, it's a collection of physical and psychological symptoms experienced by first-time visitors realizing that Paris isn't, in fact, what they thought it would be.

It is no secret that the representation of Paris in entertainment is a limited one. If the subject matter even makes it past the World War II era, one is still usually going to get a fairly idealized picture. Watching movies set in Paris leaves one with an image of the city that is quaint, friendly, affluent, and likely still in black-and-white. When we use Paris in advertisements, it is invariably some non-threateningly attractive young woman riding a bike around the side streets or skipping down the Champs-Elysées, daintily nibbling a macaroon. We imagine the whole city just smells like Chanel No. 5 and has a government-mandated mime on every corner. And nowhere is this narrow view of Paris more prevalent than in Japan, where the media portrays the city as one filled with thin, gorgeous, unbelievably rich citizens. The three stops of a Parisian's day, according to the Japanese media, are a cafe, the Eiffel Tower, and Louis Vuitton.

Yet, despite our international desire to imagine that this is a city where pigeons stay in the parks and the waiters occasionally burst into song, Paris can be a harsh place. It has its share of social problems: crime, filth, inequality, and -- our special treat for the visitors -- not-so-friendly locals. Parisians are constantly breaking new scientific ground when it comes to being unaccommodating and even disdainful towards foreigners. If you do not speak French, you can look forward to stumbling through many uncomfortable, labored conversations with people who resent your very existence. The service industry, too, is notorious for treating tourists like something they recently scraped from the bottom of their shoes. Even the public transportation, instead of being the jolly metro cars in antique underground stations we see in films, are hot, overcrowded carriages filled with groping couples, screaming children, and unimaginably loud accordion music.

Paris Syndrome manifests itself differently in different people, but amongst the most common symptoms are acute delusions, hallucinations, dizziness, sweating, and feelings of persecution. The shock of coming to grips with a city that is indifferent to their presence and looks nothing like their imagination launches tourists into a psychological tailspin which, in at least six cases this year, necessitated the patient being flown back to his or her country under medical supervision. Usually, though, bed rest and hydration seem to take care of the problem within a few days. The Japanese Embassy, though, has had no shortage of people who, in the throes of the Syndrome, call or visit to be reassured that the city is not going to collapse in upon them.

Update:  I don't want to give the wrong impression here.  When we first arrived in Paris, we had a number of people help us: the young man at the train station, the young lady on the street, the hotel clerk.  So I wouldn't want people thinking that everyone in Paris is 'indifferent', because they're not.
Posted by Carl Lindquist at 9:24 PM

Email ThisBlogThis!Share to TwitterShare to FacebookShare to Pinterest
Labels: Paris