One of the things that stick in the craw of many Americans, on both the Right and the Left, is the fact that many big-wigs in the American financial sector, including some of the biggest banks that were bailed out in 2009, seem to have broken the law and gotten away with it, in regards to the housing bubble and bust.

From all that I have heard, the amount of fraud involved in the mortgage loan industry--much of which was under the aegis of the biggest national banks--was enormous, and instrumental to the housing bubble and subsequent collapse.  Yet virtually no one has been charged, arrested, fined or imprisoned for these crimes. 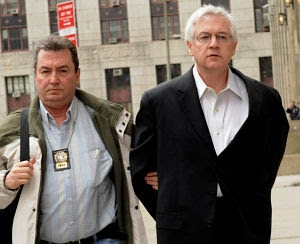 As Professor of Law and former Prosecutor William Black tells it in this linked audio interview with Tom Ashbrook, there were thousands of convictions brought about in the legal follow-up to the Savings and Loan debacle of the late 80s and early 90s.  Though the current scandel is many times larger, almost no one has been investigated or charged by the regulatory agencies and the federal Department of Justice.

This is a national outrage and is part of what drives both the original Tea Party movement and the current Occupy movement.  Until the Obama administration gets off its behind and does this, it cannot claim to have done its duty with regards to protecting the general welfare of the American people against the rapacity of white collar criminals.

Obama, don't be such a wuss when it comes to your banker friends!  Direct your Attorney General to pursue these financial criminals who have destroyed so many American lives and livelihoods!!

Mr. President, you seem to like to pursue terrorists overseas with your drones.  Well, these financial terrorists have done a lot more damage to us over the last 20 years than any of them, frankly.  So why don't you come back from your current campaigning all over the place and get to work doing this.  I actually think you'll find it will get you some votes (maybe mine)!
Posted by Carl Lindquist at 6:07 PM