Last night's Republican debate in Las Vegas was so excruciating that I finally turned it off and simply watched a DVR-recorded Daily Show with Jon Stewart.  Which leads me to ask: why is it that CNN has hosted two of these events this fall?  And why did they ran it like some 'reality show', or like 'Monday Night Football', complete with a suspenseful intro and the national anthem?  I'm surprised they didn't have a half-time show with Mick Jagger.  Is there no sense of gravitas and dignity apropos of the Presidency here? 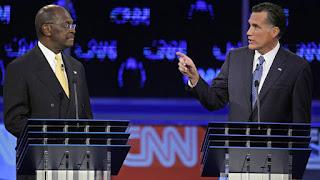 But I actually did learn something about the candidates before switching to Jon Stewart.

I learned that when you have too many debates, the 'contestants' will start to be rude to each other and personally insulting.  The best example of this was Rick Perry's lame attempt to tar Romney with hiring illegal immigrants to work on his house.  (Ok, so we learned he uses a lawn service, who uses illegals...big whooping deal.)

Ditto Rick Santorum, whose petulant attitude was unbecoming a Pennsylvanian (I was born in Erie, PA).

I learned (again!) that Herman Cain likes to use obscure references that don't make any sense with regard to what he's talking about, like 'you're mixing apples and oranges' with reference to state and federal sales taxes.  Okay, Herman Cain, I'll use a fruit reference here: you're nothing but a fruitcake.  And if you become President, I may kill myself with an overdose of pineapple.

Otherwise, I learned nothing else that's relevant.

Enough debates already.  Time to vote.
Posted by Carl Lindquist at 6:59 AM