Herman Cain? You've Got To Be Kidding Me.

I'm watching Herman Cain on 'Meet the Press'.  This new Republican frontrunner is certainly verbose, if nothing else.  He can, with a straight face, say just about anything without admitting a mistake or really explaining what he's talking about. 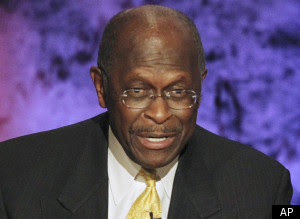 His explanations of his '9-9-9' tax plan are just plain weird.  He won't admit that it raises taxes on poorer people and lowers taxes on the wealthy, both of which it clearly does.  Instead he talks about prices mysteriously coming down on food--so that poor people won't have to pay as much--and he also talks about people buying new versus buying used.  Buying used?  What in the heck is he talking about?  Is there a 'used' aisle at Walmart?  Is he talking about people buying more of their things at 'yard sales' and on 'Craigs list'?  That would seem to be an admission that people will have less money to buy 'new' items at Walmart and the grocery store.

On foreign policy, when asked about 'neo-conservatives', Cain didn't know what David Gregory meant.  Excuse me?  You don't know the group of politicians/policy wonks/militarists who took America to war in Iraq under George W. Bush?  The average person may not exactly know what 'neo-conservatism' is, but someone running for President certainly should.

And it's not like Herman Cain hasn't been involved in politics for years.  He ran for U.S. Senate years ago, and was actually a member of the Federal Reserve Board in Kansas City in the 90s, part of the quasi-governmental structure that sets our national monetary policy (and protects bankers from the consequences of their own mistakes).  In fact, in the last debate, he professed to think Alan Greenspan was a model for what a good Federal Reserve Chairman should be.  What?!?!?!  The Alan Greenspan whose leadership brought serial economic bubbles and nearly destroyed our economy!?  Greenspan's reputation has been thoroughly discredited, and it seems that Cain doesn't even know that.

What we have in Herman Cain is a superficially intelligent, likeable and garrulous businessman who is woefully ignorant of  even basic economic and foreign policy information that a President would have to have be effective.  Add to that his 19th century social views, and we have someone here who is completely and utterly unprepared to be President and therefore unacceptable.

[Update: see the article in the WaPo today which connects Cain with the wealthy Koch brothers and their 'Americans for Prosperity' organization, which has been behind a lot of the Tea Party organization as well.]

And frankly, it should be an embarrassment that Herman Cain is the current frontrunner in the Republican Party.  Colin Powell, where are you when we need you?
Posted by Carl Lindquist at 10:15 AM