Never Before Have So Many Been So Strange

Not only do I not know how I would go about estimating the likelihood that Mr. Cain will win the Republican nomination —I’m not sure that there is a good way to do so at all. But I do know what an analyst should not do: he should not use terms like “never” and “no chance” when applied to Mr. Cain’s chances of winning the nomination, as many analysts have. 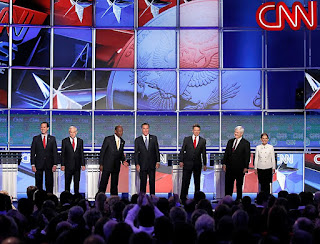 There is simply no precedent for a candidate like Mr. Cain, one with such strong polling but such weak fundamentals. --Nate Silver

After quoting Nate Silver on Herman Cain, blogger Andrew Sullivan makes some good points on the contemporary Republican Party, helping to account for its great weirdness.


My own take on this is that Cain is a great performer - he makes a living as a motivational speaker, after all - and the rest of the field is hobbled by one glaring problem respectively, while Cain isn't. Perry is simply too dumb and lazy to be president. Romney too transparently opportunist for a purist party. Paul is disqualified because of foreign policy. Bachmann is a programmed bonkers-bot. Santorum is a frothy substance whose views of the world are frozen in place sometime around 1986. Gingrich is an asshole who could never win the presidency, and even those who like his permanent smirk/snarl understand that. Huntsman might as well be Al Sharpton, because of his views on climate change, gays and because of his working for Satan. No wonder Cain has a shot, given the debates. He is likable and brilliant at simple, effective presentation. He has the skills of an actor, and a roguish shamelessness that reminds me a little of Clinton. Even though you know he's a total charlatan, you still kinda like the guy.

He's black too, and one cannot help but feel that some of his support is really a way of expressing hatred for Obama, and proving that the Tea Party is not racist.

But Cain is a function, I think, of a deeper Republican reality. It has become a wing of the entertainment industry, and in that media-industrial complex, the money to be made is immense. You do not make that money or become a star in conservative circles by actually governing, by the process of compromise and negotiation with one's opponents, or by detailed policy knowledge. In the universe where conservatism is defined by Levin and Malkin and Limbaugh and Hannity, you have to be a great polemicist, you have to be partisan above all, you need to be outrageous at times, and you have to appeal to the gut, rather than the brain.

This is an entertainment company based around a religious identity politics and masquerading as a political party. Once you grasp that, you can see why a Mitch Daniels or a Richard Lugar or a Jon Huntsman are asterisks. They know things; they want to govern, not perform; and they are not in a permanent mode of marginalized and angry opposition.

I'm beginning to wonder if the GOP is heading for a defeat they don't see coming - even in an economic environment which should make the presidency theirs' for the taking. I hope it is. Something needs to wake them up from their increasing detachment from the reality of governance.

Posted by Carl Lindquist at 8:55 PM