If Nothing Else, Obama Is Not Weak 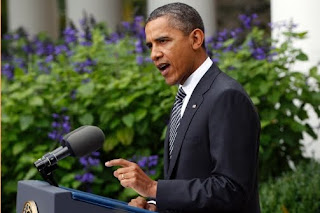 Hey, suddenly “leading from behind” is looking pretty good, isn’t it? This instantly infamous phrase, spit like rusty nails out of the mouths of neocons and other foreign-policy bigwigs ever since it appeared in that New Yorker article, may have been an unfortunate locution in this age of instant TV analysis (including some by people who probably couldn’t place Libya on a map). But it described a way of conducting multilateral foreign policy that has achieved electrifying results.

It’s worth stopping to realize that this Libya operation is, so far, not only a big success, but also a historic accomplishment in American history. Is it not the first multilateral and bloodless (as far as U.S. lives are concerned; admittedly not Libyans) intervention the United States has helped lead in its history to rid a people of a dictator and try to bring them democracy? It surely is.

The only bad thing to say about this action has to do with the Obama administration’s legal justification for it back in June, when it argued for the sake of continuing the action under the War Powers Act that what we were doing in Libya didn’t constitute “hostilities”. That was hokum. It never became a huge issue, but it’s a bad precedent, and if a couple dozen of our people had died in some bomb blast, it sure would have.

But overall this was, if there can be such a thing, a model intervention. Now comes the part where we have to keep leading, this time diplomatically, to hope that civil society can get a foothold in the country.

Additionally, let us note how the Obama record on Libya compares with the neocon record. Libya was the great case of neocon hypocrisy in the Bush years. The neocons were supposed to be different from the Kissingerian realists, right? The neocons cared about spreading democracy and freedom. But all they spread in Libya was more tyranny, because Gaddafi did what the United States asked with regard to Sunni extremism. The Bush administration’s normalization of relations with the state was one of its true moral low points (quite a competition). Perhaps Gaddafi has renounced terrorism against us, but he hadn’t renounced it against Libyans, and it just showed that when push came to shove, the neocons could be as ruthlessly Kissingerian as the master himself.

And finally: how out to lunch do those Republican presidential candidates look now on foreign policy? Though the foreign-policy discussion got little attention, it was the most unhinged part of the last GOP debate. The Republican electorate may eat up potshots at Obama for being weak, but I doubt the broader public is buying it. A president who iced bin Laden and has overseen the ousters of two leading autocrats (and a couple of other minor ones) is not weak. Leading from behind, the sneerers forgot, is still leading.

Posted by Carl Lindquist at 2:27 PM